Well, I had my first issue since swapping in the new stuff. Imagine the one thing that I decided to skimp on lets go. This is a perfect example of “If you don’t do it right the first time you’ll end up doing it over again until its done right.”

So it was Friday night, we were heading back from Sonic and there is a rather large hill that most people enjoy powering up including myself, so I decided to open up the throttle and let everything stretch it legs. In 3rd gear about 6500 under wide open throttle the engine shuts down. At first I had thought there was some type of timing retard issue and just immediately shifted. While decelerating the check engine light came on and as soon as I pushed the clutch in the engine immediately dies. I coasted over to the side of the road and went the back and smelled what seemed to be the clutch. After attempting to start the engine a few times with no luck AAA was called in and we took the party back to my house. The engine sounded like it was low on compression and didn’t have it in two or three holes. My worst fears at first were that the new fuel pump was faulty and I wasted the ring lands from a lean condition. Once we got back to my house I removed the rear cross-member and the timing covers to discover that I has wadded up a timing belt: 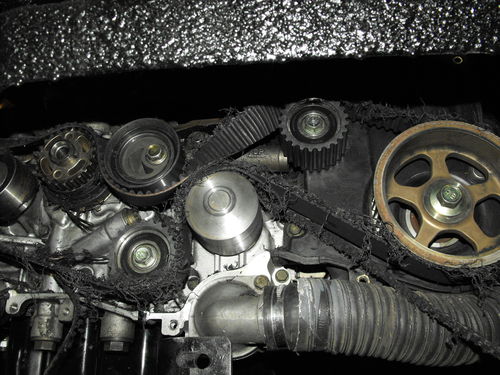 The cause of failure and clutch like smell was almost immediately evident upon inspection, one of the smooth timing belt rollers apparently almost got ripped out of the block: 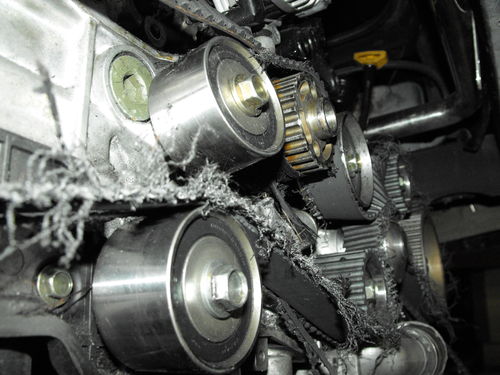 The reason why this happened is because I attempted to make the incorrect timing belt rollers work for this application. The rollers were the same diameter and width but my problem was with the backspacing. The EG33 rollers have approximately 3/4″ – 1″ backspacing, the rollers that were sent to me have no backspacing at all and are just flat. At the time I was assembling the engine new parts would have been several days out and I really wanted it to go together so I devised a plan that would allow me to use the rollers sent to me. I discovered that the center of the EG33 rollers are pressed in, so after pressing them out I then cut them to account for the thickness of the hole on the newly acquired roller. This was great with the exception that because of the thickness difference it changed the bolt length required for proper bite into the block. (Notice in the picture how the other bolts in the rollers are recessed) Subaru actually uses 2 different bolt lengths for their rollers, the idler the tensioner actually pushes on uses a longer bolt by about 1/4″ (10mm or so) and since I had a couple extra that I what I used for these home modified rollers. When mocking everything up it worked out great, the thread bite was less than factory and was almost unsatisfactory at the time. I went to the local hardware store and was faced with a less than spectacular metric bolt selection. **cough cough Ace, Home Depot, and Lowe’s (good grief)** Once I did find the 10mm bolt in the length I needed they only had it in one threadpitch, 1.0 or 1.5, and I needed 1.25. This reminds me of the golf cart project when I had to go to Mcguckins in Boulder. I guess I could have driven the 60 or so miles round trip but it seemed like the thread bite I had would be enough to warrant a try. So after tightening everything up it worked rather well so I preceded with assembly and didn’t think anything of it, until Friday night. 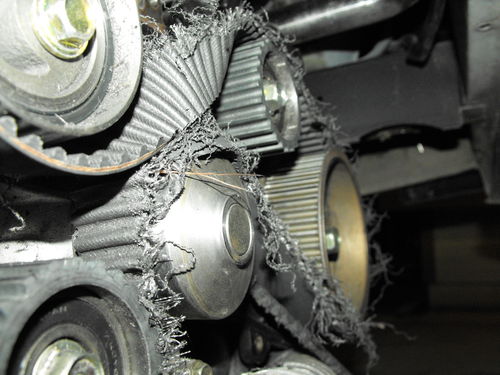 Interesting how my judgment was indeed correct in this one and what in my mind was half-assness became a failure point! This was a great learning experience for me in many ways, for example in my experience if I feel that something isn’t quite right, it’s a pretty safe bet that failure will occur if I choose to chance it. It helped me better understand the forces endured on a timing belt setup while the engine is in operation. Since the engine turns clockwise and the upper roller on the left side (Drivers side in Van, Passenger side in SVX) naturally will endure that upwards stress because the crankshaft sprocket is pulling on the belt, up and over, so much if not all the loads of what it takes to run the valve-train must pass through the part in this manner, and that’s extremely important!

So after removing the incorrect rollers, and the old timing belt (well, it had 1,000 miles on it) and the shreddings of the belt. I decided to put on a new used belt and correct used rollers (bearings were trashed) as a test to see if the engine would even still run. Remember this engine has 4 valves per cylinder and flat top pistons for a healthy 10:1 Compression Ratio under most circumstances losing your timing belt in any DOHC engine is catastrophic. After assembling the parts on the engine and installing the harmonic balancer I bumped the key and it fired right up! I immediately grabbed the camera and let the engine warm up fully while very carefully listening:

I was amazed, yeah, it was listed as an engine where this was possible. However, in my past experience with VW engines I have had valve collision. (for example on a G60 Corrado, PG engine I bent all 4 exhaust valves.) The heads had been cut .025 (may have been .015 the receipt doesn’t say booo) so that should have further diminished the chances of this beast surviving, but it did.

After it warmed up I did a compression check and all Cylinders were within 3psi of each other right around 140psi. This is below the book’s specs which call for 175 – 210 psi but don’t forget how much material I removed off the heads, the Cometic headgaskets, and the fact that the Altitude at my house is 5200 feet above sealevel. If you ask me, this just makes it more safe for turbocharging. I then hooked my airhose upto each cylinder set at TDC and did a quickie leakdown test which didn’t reveal any anomalies at all!

This is a true testament to Subaru’s ingenuity with the EG33 and when that hit me it left me speechless. (did you hear me talk in the video!?!? haha)

I will have more to share soon of what happened to the old engine that succumbed to oil pressure issues. Friday I will be purchasing the remaining items I need to completely disassemble the old engine for a full failure analysis. After the point of failure is determined I will then proceed to completely rebuild the bottom end with all new parts, I didn’t actually spin any bearings in this motor it’s just sloppy so it should be a good buildable core. I am not completely sure if you can find main bearings and rings packaged as an eg33 anymore, however I do know that since it shares components with the EJ22 you can use the rod & main bearings, as well as piston rings! That is why whenever I hear someone mention that they cannot find parts for the SVX motor I roll my eyes. Just because its not immediately behind the counter at an Autozone or Checker doesn’t mean you can’t find it at somewhere other than a dealer ship. (i.e. rockauto.com, partsgeek.com, etc) Online stores offer very fast shipping, granted there is still a delay but when it’s all you have available that is what you will be doing. Don’t be like me and try and make something work, just eat the delay no matter how hard it is. (Remember this is my daily driver 🙁 ) Anyway, once the shortblock is assembled I will hang onto it dry and have it at the ready as a spare engine.

After this next week is through I should be back on track with the electronics and the digital cluster. I have several pages I need to add to DoogieLabs and they are 1/2 to 3/4 of the way done which I am going to make an effort to have up by next weekend.

doogie
I'm not completely sure, but I think it was here and gone. What was supposed to be another month of

doogie
I haven't had much in the way of extra time, between work, spending my days off wiring a project car,