When choosing to put any type of Subaru engine into your VW, great attention should always be paid to the transmission. The Vanagon 091/1 has a special consideration of it’s own, any Vanagon transmission before 1990 will have a defect in the 3/4 hub because of poor metallurgy. When adding more power this will always need to be replaced and since the transmission is apart it’s a great time to upgrade some internals to one’s liking. (remember the stock Vanagon engine is roughly 80hp) When I decided to install my EG33 I understood the transmission was a ticking time-bomb, I purchased my transmission from the junkyard for a lump sum of $90. I removed it from a Vanagon that was also an ’84, but had unknown mileage due to a missing instrument cluster. The transmission actually turned out to be great, for a while. I learned a few things the hard way so let this page serve you as a basic guide to what hardware every Subaru-swapped Vanagon’s transmission should have.

When I began researching transmission options it was mostly recommended to use the 5 speed (diesel?) transmission as it has the longest available gear ratios, the torque output of the eg33 well exceeds 200ft lbs and it’s all readily available at a roll of the throttle. I knew the “6 rib 4-speed” was used in dune-buggies and has readily available aftermarket parts but the stock 091/1 in the Vanagon is geared very low at a ratio of 4.86. After installing this transmission I discovered that cruising the highway at 75 – 80mph meant maintaining the engine at a healthy 4200rpm! I am pretty sure the failure of my 1st eg33 can largely be attributed to too many short-geared fast paced nights. 🙂 The solution can be found in the gearing, changing out 3rd and 4th gears to a ratio of your liking is just what the doctor ordered in the way of long engine life and fuel economy.

When researching a place to pick up aftermarket trans-axle parts only one place came consistently highly recommended to me, Weddle Industries. After working with them for a few days on what was needed I finally had a plan set in stone. If you chose to go through Weddle you will discover unsurpassed customer service and expertise, I found these guys a huge help when it came to my smaller transmission questions. I initially stated that I wanted the longest 4th gear they carried which has about a 1200rpm drop over stock when you have stock sized tires and the .486 r&p. Because of the substantial change in gearing I decided to go with a new 3rd gear also so the rpm drop was manageable.

I decided to go with a 1.14 3rd gear and a .70 4th from Weddle and even got their hub and slider kit which is made out of an exceptional metal. They ship really quickly too!

Since Weddle doesn’t have a catalog on their site here is an estimate that I originally had done to rebuild the complete transmission (top) followed by the final quote (bottom) because I decided to purchase a new transmission to apply the upgraded parts to, remember that these prices should be considered “general”: 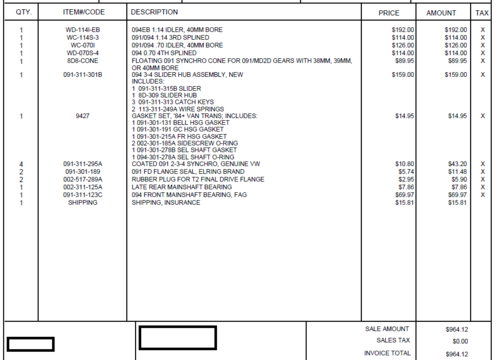 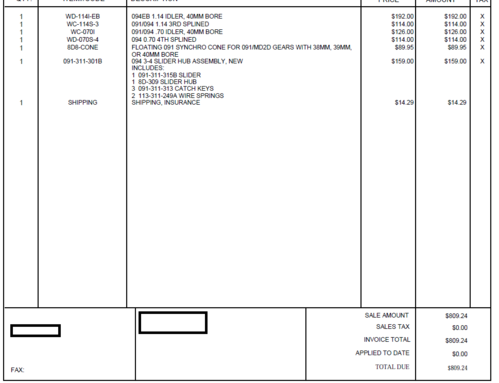 Here are some pictures of the gears themselves:

This is the hub (inner piece) and slider (outer piece) that is defective in older 091/1 VW transmissions: 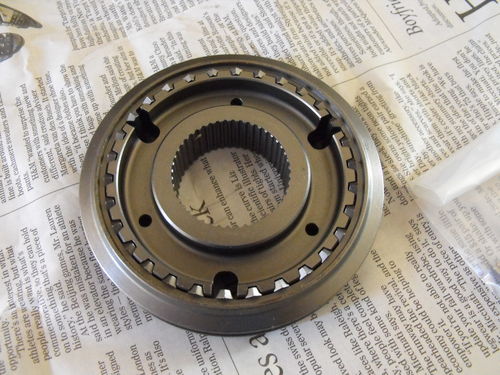 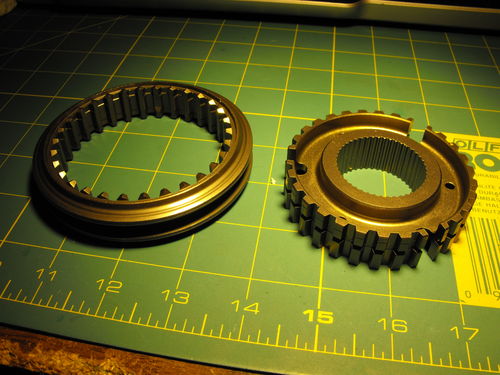 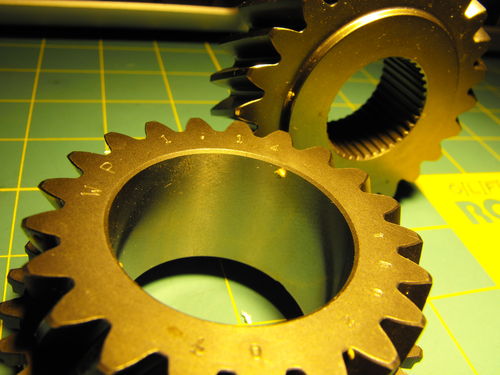 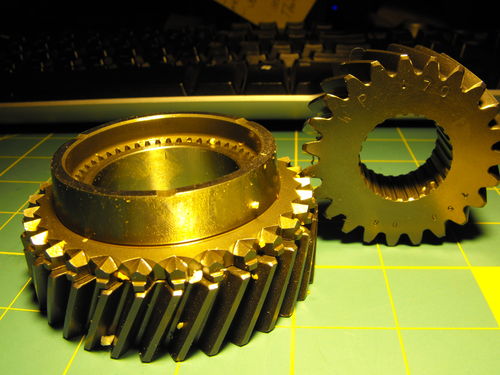 Driving a 2WD Vanagon in the snow can sometimes be a chore, remember that because of the open differential on a 2WD there is only 1 driven wheel at any given time, this makes it disastrous for the winter time. I have read many accounts on the internet where someone will be traveling over some black ice only to loose the back end into a guard rail, another car, etc because of only the one drive wheel. Peloquin makes a very nice planetary differential to alleviate that very problem and I decided to go with it because of the friction disc-less design. 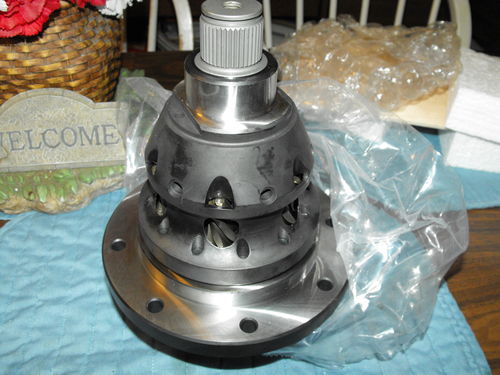 As it turns out the gears are already cryo treated so if this is a process you are considering the diff is already done! 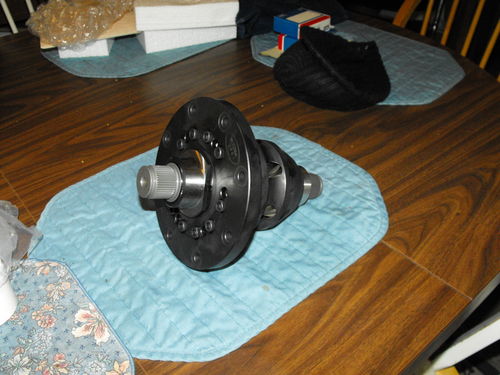 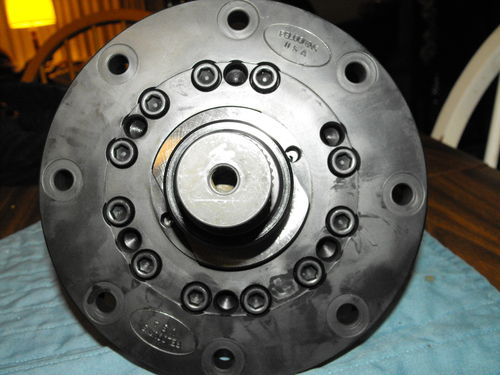 This is the most important thing about the 091/1, DO NOT USE SYNTHETIC OILS! The sulfur additives contained within synthetic oils will actually eat the brass metals of the synchros, the oil needs to be rated as a GL-4 and the only GL-4 in synthetic is Redline MT-90. I decided to just avoid any issue altogether and run the best standard gear oil I can, remember you will need a GL-4 rated 75w90 and should be filled to a level of about 9/16 of an inch below the fill hole. (roughly 3.2qts)

For those of you who haven’t heard of cryogenics and what it means to the automotive industry lets have a quick lesson. Basically think of the heat treatment process and how it hardens metals, cryogenics is the same type of thing except the opposite in the form of temperature. A very precise temperature controlled & timed process will cool the parts down to around 300* F below zero and slowly bring them back to temperature. (this precision process can take as long as 4 days and is followed by a heat treatment process) This significantly hardens the metal but it also changes the metal on a molecular level to make it wear more slowly. Parts have been proven to last 200 – 400+% longer than those parts that didn’t receive the treatment process, that is huge! Imagine your 250,000 mile engine lasting 500,000 miles! Cryo-treat your engine’s internals and it’s possible and the durability has been proven at track after track nation-wide.

When it comes to my EG33 swapped Vanagon I feel that Cryo-treatment of the transmission’s internals is a requirement. It’s a guarantee that the parts will want to mesh together better and shift smoother. I have quoted cryo-treating my parts at $2 per pound of metal, and absolutely everything in Albert’s transmission is receiving the treatment.(including the newly purchased Weddle gears)

I am working with a local transmission shop as they have agreed to take my performance parts and install them into a 100% rebuilt 091/1 they have on the shelf (so everything is new!) and installation of the parts would only cost me my old core! (The trans was $960)

After a while I got it back in it’s very nice form: 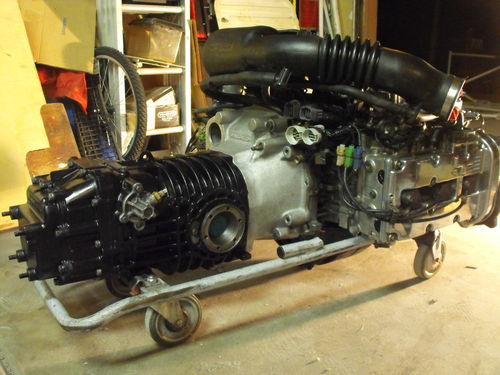 1,000 mile update: If you are considering getting longer gears for your Subaru swapped Vanagon let me tell you how WORTH IT that made driving this. I saw a fuel mileage increase, instead of 13-14 on average I have started to see 15-16mpg. You’ll want to keep in mind this isn’t really normal driving by any means, when you have something with a weight to power ratio such as this it makes you want to scoot along. One thing that should be noted at least with the EG33 and this gear setup is that you stay in the torque portion of the power band much longer. Lower rpms like 2000 and under are very smooth and push the van along and even up hill quite nicely. The Stage 1 chip I was using didn’t seem to handle the lower RPM’s very well and I found myself burning new software with some tweaks to prevent low rpm jumpiness / hesitation which will be dynotuned out here shortly.

When purchasing the new 4th is was recommended to me that I really should change 3rd as well, I am glad that I did and highly recommend the same if you are considering such a swap. By the time I was all said and done I had spent $3000 on this transmission in total to do it right. I would expect anyone else to spend about that much for the same mods, unless you know how to build your own trans. After everything was all said and done the money spent may have been better spent on acquiring a Porsche 5 speed box and all appropriate pieces. I have seen them list for around 1500 so by the time you are done sourcing a clutch and adapter plate you’ll probably be right in that 3k ballpark. If anyone has done the Porsche gearbox in their Vanagon / Buggy I would love to post a parts list / cost analysis if you have the information available.

One thought on “Vanagon SVX Transmission”