The weather has been up and down here lately which has left me slightly more time to work on the electronics end of things. What time I did get outside was spent assembling the intake manifold so it looked very nice. The intake manifold isn’t 100% complete on the polishing process, it actually still needs to be clay-barred, but I just haven’t had the extra cash sitting aside to pick up the bars. The shine isn’t all that bad actually the manifold still looks great but it’s not quite that mirror shine we all look for. Here is what it looks like now: 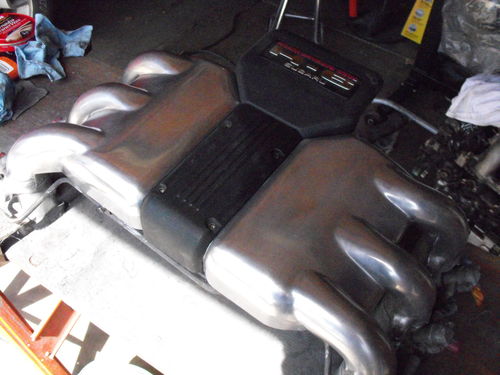 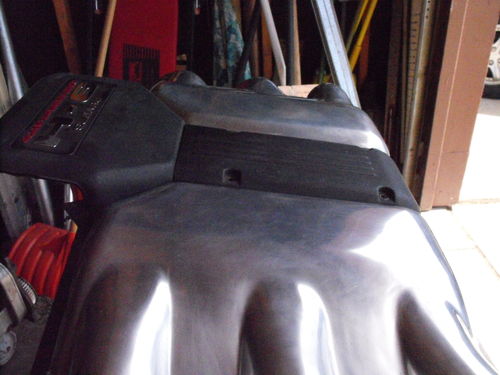 It doesn’t look bad at all, and for what will be a daily driven vehicle I think this looks very nice! So now that I was mostly satisfied I decided it was time for re-assembly, there were a few minor things that needed to be changed for this manifold, one of them being the fuel lines. The JDM engine had a couple of things crunched in shipping, and one of them was a kinked fuel line. It wasn’t kinked enough to cause the engine to not run, but it definitely was enough to the point where fuel could be starved at higher RPM’s so I decided to make the switch to my US lines. Since these are metal lines that run across the manifold there are metal vacuum lines attached with it for various emissions components such as the evap canister, EGR, etc. Since the JDM engine doesn’t have EGR and the evap canister in the van sits up front / separate from the engine I decided to cut of any excess un-used vacuum lines. This actually cleaned up the overall look quite nicely as much of this was plainly visible in the engine bay: 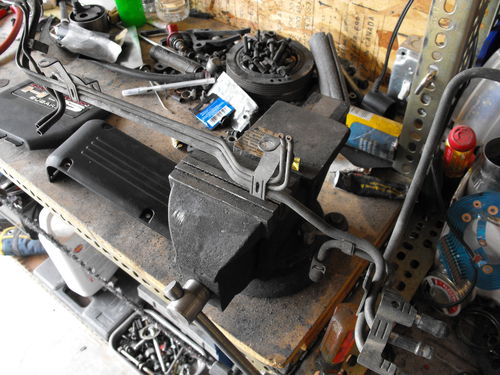 Here is a nice little pile that I was able to come up with after 15 minutes of shaving: 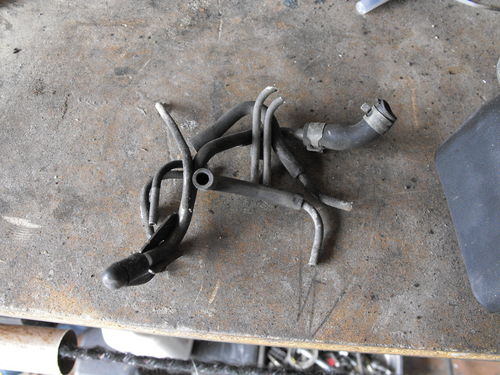 You can actually see the line installed on this picture, along with the new wiring harness: 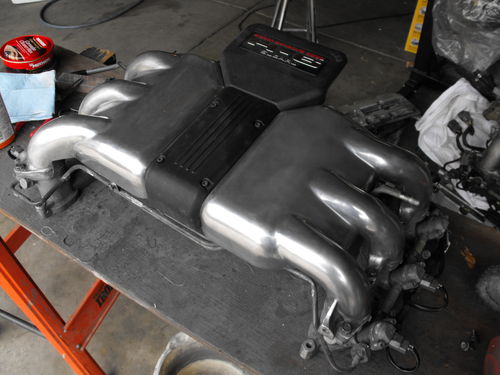 Here is an undershot of the new intake manifold harness, looks great all tucked up under there. Some other things I completed was replacement of the vacuum lines for the variable runner length system: 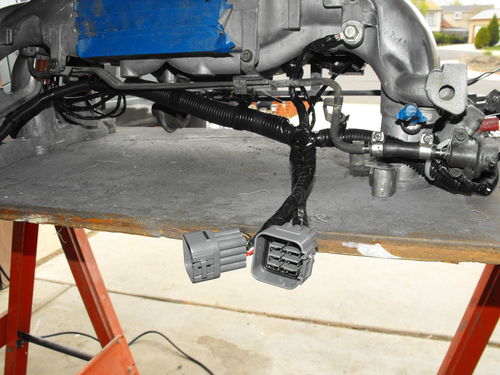 These wiring harnesses are very expensive, which is the main reason why it’s the only thing I have been able to purchase per paycheck effectively delaying the project, but I really really needed them. The lower engine harness showed up this time around over a week after I ordered it, for over $100 less than what I would have had to paid going directly to the dealership, it’s going to be nice to not have to deal with brittle connector plastics anymore: 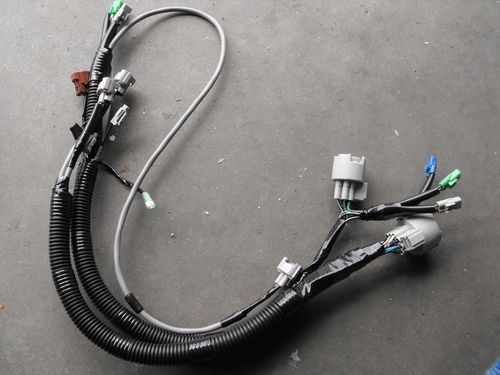 After putting the throttle body on and changing the fuel injectors that were damaged / plugged I decided to snap a couple of more pictures: 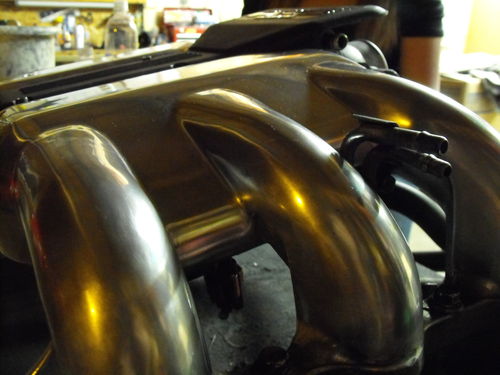 Should look really good sitting in the engine bay: 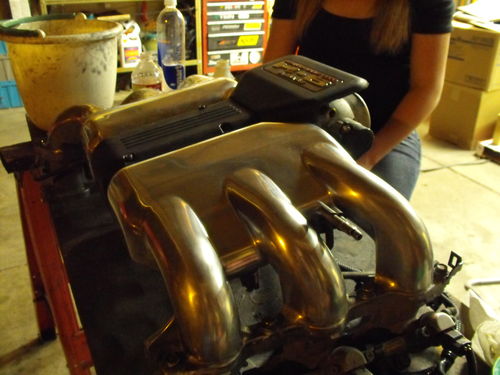 Now that it’s not so bright outside you can get a better idea of the reflection, not too shabby: 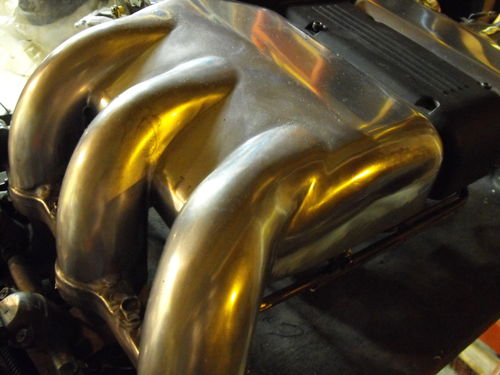 Installed injectors, the very back injector cap has been sanded with 220 grit in prep for polishing: 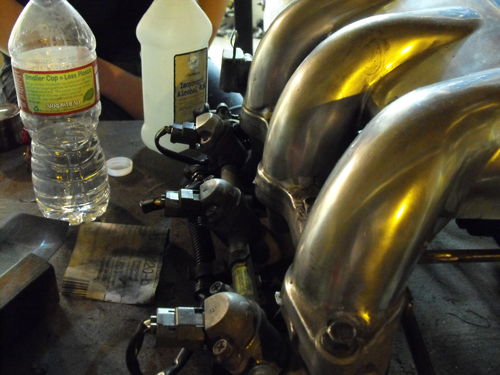 I have ordered a bunch more stuff and it is currently making it’s way to my house, it’s all engine stuff for the moment and will surprise you with pictures upon it’s arrival. As of today 4/26 the only things left to acquire for the engine are Head Gasket, Head bolt set, and knock sensors. I also don’t have a set of intake manifold gaskets, as they are $50.00 each or something outrageous. Since the last home-made set worked incredibly well I will be using the same technique again, there is also a local motorcycle junkyard that has a gasket making machine that traces the old gasket and cuts the new one out for you. Very handy, and it was $15 a gasket or something like that, this route maybe worth pursuing. I am hoping to get started on some more body work for this week, I have been putting it off for weeks in hopes of having a couple of 70 degree days back to back to allow me to work on exposed metal but the weather has been very up and down. Since the engine stuff is nearing completion it has become crunch time in finishing the rest of everything else body-work wise. All I have left really is the wheel arch on the driver’s side, and some stuff on the hatch that needs to be tied up. The plan is to complete the engine / transmission and then stick them out of the way somewhere so I can pull the van into the garage and take all of the window glass out for paint prep.

Well really I have much more to share but not enough time to fit it all into a single helping. I guess I will have to save the electronics stuff for next time, I have been working on a circuit board laminator using an old fuser assembly from a laser printer haha details later do work for now! 😛

Here is a random post with several things I’ve been working on over the last month that I figure you might enjoy..   This is a 1996 Bluebird Wanderlodge, I’ve been doing various things to it. I enjoy the drivers area as it kind of reminds me of a space shuttle with all the instrumentation […]

Well I have been extremely busy, with everything whizzing around I only get 2 or 3 hours here and once in a while 4 hours there to get some port-work done. The machine shop that I go through still has me in limbo, haven’t actually gone over to talk to the guy to get an […]

NEWS: – The DoogieLabs Vanagon page has been updated, JDM engine section has been added – The downloads section was officially moved over from Area51 – Added a poll BLOG: Disassembly of the JDM engine has commenced while I wait for my 3rd and 4th gears to come in from weddle industries. The engine has […]