Well, we received a ton of snow here and along with it came blinks in the power. There was no actual power interruption at my house but there was enough that it reset my server continuously and blew every capacitor inside! I wasn’t aware of the events for quite some time, when I received the phone call about the dirty power happening at the house the ups was already shut down. It was acting a bit flaky with power resets in the past requiring manual intervention to restart. (doesn’t help the ups batteries were missing) It damaged the motherboard of my little Dell quite nicely, check out the carnage: 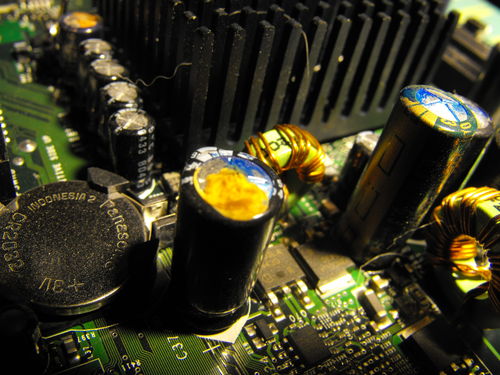 All the caps that were blown were marked in various colors, grouped by value. I then created a list, cash is a bit tight at the moment so I had to source the stockpile in another attempt at life: 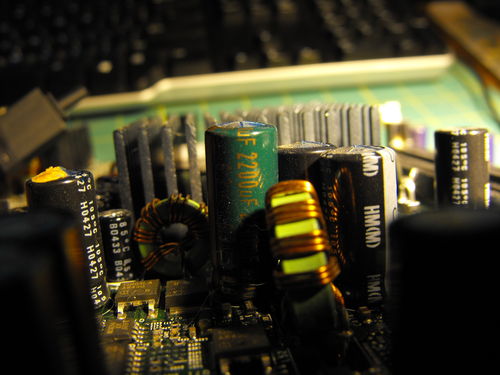 Even the blown ones still tested good with the capacitor wizard! Well guess that $200 piece of test equipment doesn’t really work correctly, so when working with caps just replace them all anyway. I ended up slacking and not replacing all so I think that is still contributing to the issues that continue, hmmm maybe I should look in the power supply? 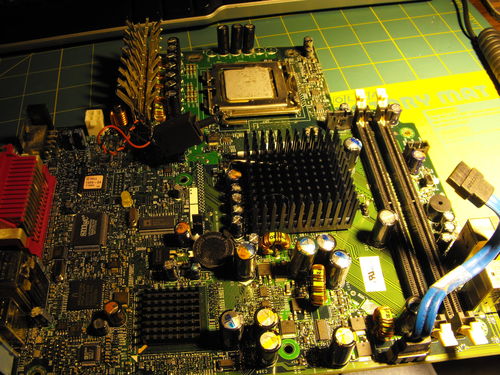 Finished up replacing all the caps I had parts for, there are small blue stubby ones that I had to steal from my spare xeon motherboard. (for some reason dell motherboards use 860uF caps) 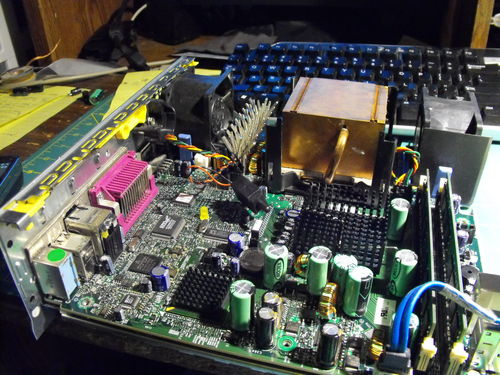 After completing the repairs the computer would run for about 5 seconds before is does a brief brown-out type reset, the computer re-posts, them repeats the reset. This happens about 10 times over the course of 7 or so seconds and then it is stable and starts to boot. My SuSE linux loader appears and as soon as it moves on to the kernel the computer resets and the whole above process starts from the beginning. Luckily, I have been building another server on the side, its a dual Xeon MP tower with 2x 2.8GHz CPU’s w/ hyper-threading. It makes for a screaming Linux box and has a nice video card. I think I will attempt to fix the little dell again over the coming weeks but for now I have too many other things to work on so off to the parts bin it goes.

If anyone wants to trade I need 2x 512Mb RDRAM sticks, in return I will give you my 2x 1GB Kingston DDR2 sticks pictured above. The little dell was a 3.0GHz machine and with that 2GB of ram in it I never had a problem, even Windows Vista booted fast!

More to come on the Van, body work continues and parts are slowly accumulating, its also bulk trash day around here so I am busy setting stuff out this weekend as there is much to get rid of.

Blog and shtuff for the rest of June, and now July 2014

doogie
Lots has been happening over this last month. Where do I start?   Okay, first off I have finally gotten

doogie
Whatup Yo! So I got a few of these cobalt power steering motors on hand, these are the recalled units

Stand up and FIGHT! Or we’re screwed!

doogie
I received an email in regards to the six strikes rule. It sounds like the Obama administration is side stepping