Finally got the footage up I took of the last test&tune at Bandimere for 2010:

The Corrado has been great over the last week. I finally got some things debunked that really needed looked at. The first was the strut tower bushings, the setup that I came up with wasn’t quite corrected and got rid of the G60 bushing in favor of the MKIII bushing that came with the setup I had purchased. 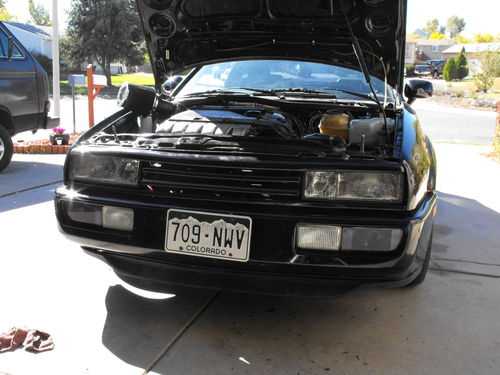 It only took about half an hour to get that all switched around. I also finished the shift linkage setup and corrected the minor bugs I had with it. I am not sure where the clip went that I had put into the shifter rod for the front to back cable but it was missing. It took me another hour to carefully fit a new pin with the precision of needle nose pliers in a screwdriver. I got away with not having to take apart the exhaust tunnel to get to it.

I also have started to pay attention to the leaks that seem to occur with this engine, I don’t think things that leak and I like to think that I take a more proactive approach to preventing them than most people. I brake parts cleaned the oil pan and around the crankshaft pulley to see if it was a gasket or a seal was bad. The preliminary results show that the oil pan gasket and the valve cover gasket have failed and need to be replaced. 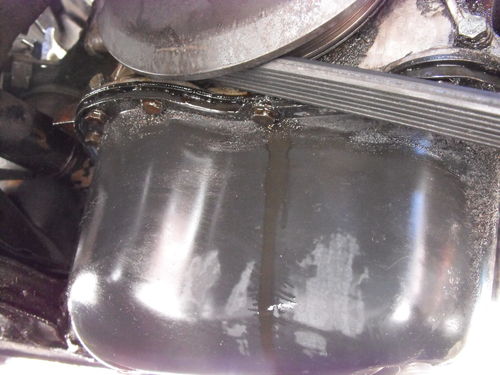 It doesn’t seem like anything besides those two are causing any type of mess here, in some ways I want to say oh well and just disregard it since I am starting the build on the turbo motor in a month or less anyways.

This weeks electronics project got a little interesting, I was given and old Greddy electronic boost control setup that the guy was never able to get working right. I was very excited to have this for parts so I could use the boost control solenoids with my Corrado and the HE351ve turbo I plan on using. I am back and forth on how to make the turbo controller as well. I know that megasquirt has a very nice EBCS function that works well, so this is my natural first choice in what I should use the solenoid box with. Remember however that I am going to be using a VGT type turbo and this one happens to use electronics to vary the vanes in the exhaust housing. Since I plan on gutting the factory turbo ECU that is onboard the turbo and building my own electronics it makes sense to have the EBCS function a part of the turbo controller, or does it?

I am definitely back and forth on what todo, for now I constructed a nice circuit using a MOSFET and my PIC16F controller to see what it does. I was able to get the unit to actuate okay, when there is no power applied full boost/vac passes though the box. It doesn’t impede flow until power is applied to it, when it does need to impede flow is actuates the solenoids in an on/off/on/off type of cycle so many times a second. (you can think of this as a certain “frequency”) and it will let more or less pressure though depending on the duty cycle. Expect to see more on this in the future when I get more into the Corrado and the electronics that runs it. 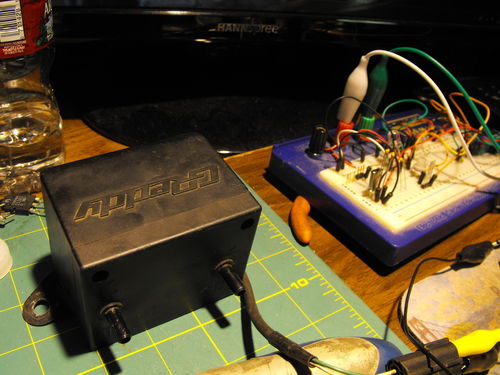 I have also been collecting blown up car audio amps for repair or parts. If you have anything that’s fried that you want to get rid of please let me know. Instead of it going to a landfill any of these electronics are tossed into a bin where I will pull the components as needed off of the boards and build them into my own projects. I have a small collection of lots of different things so far and it’s growing weekly, I am hoping to increase the variety of the components available by acquiring some UPS’s or Stereo Receivers, etc. Here is this weeks shipment of free stuff to pillage parts from: 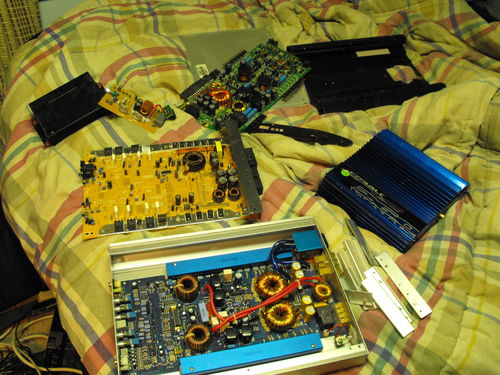 I actually plan on attempting to repair the larger one so I will definitely make a post about that once I get more in-depth with it.

One of the things that actually came from these parts was another H bridge motor controller for BrushLess DC motor control. (BLDC) Instead of etching a board for this project I decided to try it the old fashion way, I learned quickly that it was actually a slower process then designing it on the computer, and etching the board. I haven’t finished it yet and its partially tested, my goal is to hook it upto a hard drive spindle motor and have it spin up the motor. My goal is to get the RPM’s over the drives rated speed, and I think this will do it. 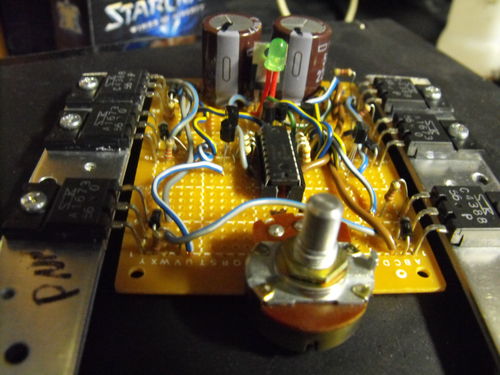 It has been a little tougher than I initially imagined building this controller and getting it working alright. It has been a great learning experience and I hope to apply this knowledge into a full electric vehicle project one day using a 3phase A/C motor. (and some IGBT bricks) Once I get this guy tested and running on a motor I will post a video of it in action.

So what else is going on the DoogieLabs camp?

Actually, I’m moving! That’s right after spending all my life in the same location I am finally getting out on my own. I am most excited as this leaves a great amount of uninterrupted time in a not so cramped space. I will have my own office and my own garage to work in whenever I damn well please. Its going to be great! I am very excited to be moving, even if it is only 3 houses down. Because of the move I imagine there will be a delay in posting any new material on here, but when I do I will have plenty of pictures of the new work areas and the arrangement they ended up in.

Stay tuned next week I should have some more goodies for you!

doogie
Another busy and not busy week in the books. I haven't been posting as often as I like but I