So I found out that more rent is owed at the shop than I was expecting since my partner backed out. I am ready to sign the new lease, but need to get this paid first. Time to kick it into high gear!

I am a bit of a slacker in getting the tour video of the mobile PCs finished, but have listed them on Craigslist. I have listed the remaining parts of my Shop A/C project, and anything else that is expendible is going up to contribute towards rent.

On the up side of things, I have a nice tax return check coming to me so that can potentially help out, HUGELY! Is this supposed to provide some kind of false sense that the government is helping you by providing you a check for a small portion of 3 working months of the year you pissed away in taxes? Kind of seems to, but I digress. I’ll take anything I can get at this point, it helps! 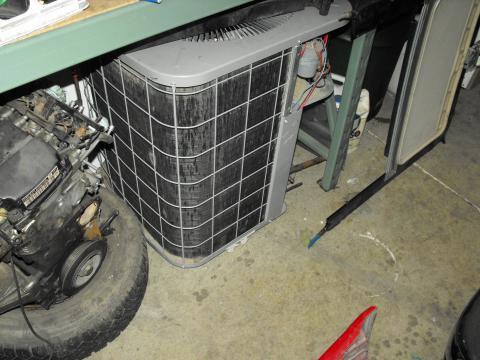 (Pictured Left) The shop project A/C unit, getting ready to be sold off. I’m sad to see it go, I was all for charging this puppy with propane. I’m incredibly resourceful so I don’t think I’ll have too much issue finding another one when its starts to get warm outside. I know that if I can survive the winter that Summer will be good to me. Who knows, maybe I will even find a mini split system and then I will be able to bulid an even more compact cart. A little more shop space is a plus too, so Im not too terribly sad to let this one go. 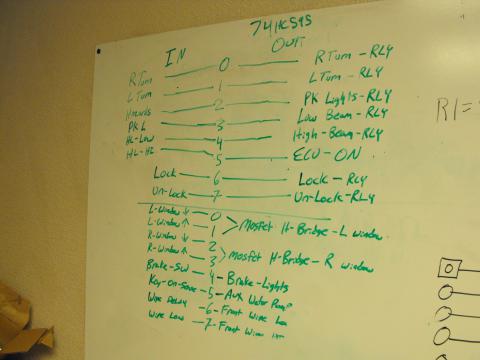 The Black corrado sits idly by, I did come up with this high level diagram for the Body Control Module (BCU, BCM). Im starting to get an idea of the general inputs and outputs I would need to accomplish such a task as running the whole vehicle. This diagram does not include the turbocharger control, or megasquirt itself. This module would control everything else on the vehicle.

So… Whats new?
Well, the sites have been running smoothly on the sun server for over a week now. I have been working on porting my backup scripts to the solaris operating system, which was fairly easy. I edited and released the third iteration of a small utility I use on my sun system to parse the DF(diskfree) command ( http://en.wikipedia.org/wiki/Df_%28Unix%29 ) , it’s called Icespace.

I originally named it Icespace because the servers name is icebox, and space because I needed to know how much space was left on certain mounted drives. In Solaris, there is this annoying issue where everything seems to be a filesystem, so for example if I ran df -h : 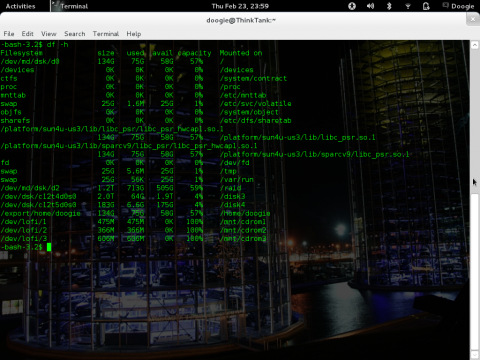 What a confusing list that I dont really want to sort through all the time, so using Solaris Studio I wrote a real quickie C++ program to parse the DF command and grab only the output that I want to display. Techincally this could be easily done in a shell script but I like the idea of packing it into a binary executable because checksum features are easily implimented for security reasons. It took about 15 minutes to come up with something that worked really well for me and soon the output went from a screen full to something a little easier understood: 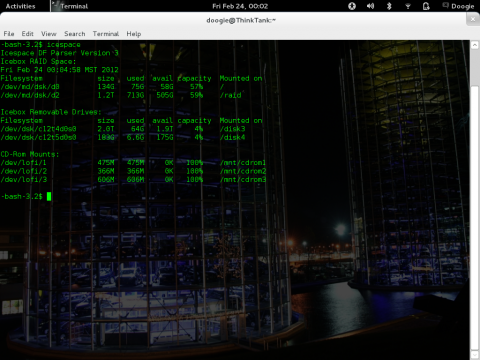 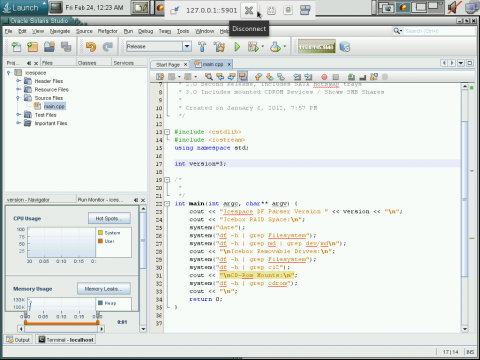 I can post the full source code on request, I plan on adding the checksum stuff very soon, which becomes sort of a “cookie cutter” when working within other programs. I think I may actually create a backup program using C++ I have had a few new ideas since working on this one originally.

For everything else, there are two videos filmed and coming soon to my youtube channel. I have one video coming up for sure I still need to shoot. I also got a new set of wheels, but I will have more on that later Friday or Saturday 2/25.

Until next time.. Enjoy,
Doogie

doogie
Back after a very hard week! Some of you may have noticed that last week the icebox server was down

doogie
Well hello hello Not too much to report, started moving stuff out and scrapping that last of the junk that's