Alright, I must admit that it has been quite a while since I really have posted anything. There has been a lot going on, but finding time to sit down and write things isn’t always easy. First off, the site has been moved off of Fookushima, the G5 Quad has been removed from service. Why did this end up being the case? Storage. With the limited wattage I am allowed to run computer toys in the house, the server that hosts the site must also store my stuff.

One of the things I did to the G5 was attempt to expand the storage in it. I added a SATA card, three more 2TB drives, and in RAID 5 I had a total of 8TB of storage. This would have been perfectly acceptable in the short term, but I was having major issues with storage speed. Because of all the stuff in the machine, between the SSD card, and graphics card, etc. All of the PCI-E lanes were in use. I have having continually high I/O wait times in Linux. I was only getting 10MB/s transfer speeds to and from the disk array after adding the other three disks. This was terrible and completely unacceptable. Since I edit videos, depend on my storage array for CCTV footage, and much more it is important that I get well north of 100MB/s transfer speed to satisfy all the requirements at the same time. I wasn’t aware of it at the time, but a solution was about to fall into my lap from an expected place. I remember when I moved the RAID 1 to RAID 5, the conversion and growing to the new size took over a month! 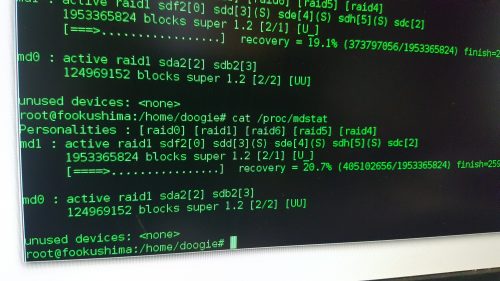 My friend Gus passed away this last December. He became ill and was left us before a doctor was able to properly evaluate him. Gus, I will miss you forever. He left behind an extensive collection of computer hardware, a lot of which was Sun stuff. Him and I were fans of the Western Digital Green drives. We’ve both had many 2TB green drives over the years and have had little in the way of failures. Between the drives he left behind, the drives in my desktop and the drives in my mac I was able to come up with a plan.

I picked up an IBM X3550M2 Dual 1366 server at an auction I frequent. I had taken this server with me to NC to have with me while I experiment and get acquainted with ESXi. I wanted to move toward virtualizing at least some common systems that I use and depend on instead of trying to make a singular Linux installation do everything and risk breaking it all if I bork something. Processors for the 1366 socket are cheap, especially now with the rise of Threadripper and Ryzen. For basically no money towards processors I was able to yield sufficient computing power to do what I wanted to do. The servers are plentiful and cheap, and thanks to some parts that I had laying around I was able to build them out to be quite useful. There will be more in detail on this in the next few weeks as I get together the video that details the latest changes to the “Military Rack” 🙂

I randomly found this at the thrift store the other day; It was $50 which I didn’t have, or have the room for. I figured that I would see if it worked, and maybe consider it if the thing was functional. However, the fuse holder was missing. Since I couldn’t power it up, I left it. Perhaps I will make a trip back there later to see if it is still there. 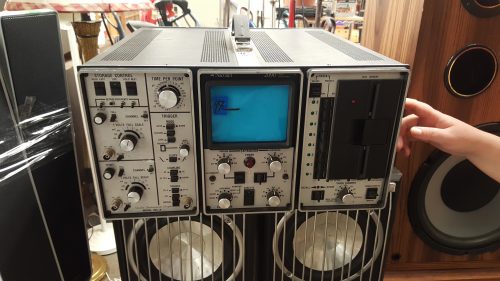 I want to get back into the swing of writing articles again, and what I am going to continue to do, is write about those things individually instead of cramming them into a single “Year and month” type update. I think it makes it more difficult to search for things when a bunch of crap is condensed into a single post. I can’t wait to get back to a point where I can be on track building things again. I just need a few more months to get the garage emptied out and my stuff sorted. Things are slowly coming back together though.

HOWTO: Setting up the RSC Console

doogie
Silicon Graphics Fuel The fuel by many was regarded as a later replacement for the O2. I think that it

doogie
Whats up all!   I have been pretty busy with stuff here at the shop. I have had a few