You’ve heard aboutfuel injection and carburetion, what about vaporization?

Running an engine on nothing but fuel vapors is definitely not a new idea. People have experimented for ages (as early as 1930, maybe even earlier.) with various methods to optimal fuel delivery into an engine. The two most popular methods we use today to fuel engines are systems designed to carefully meter the amount of fuel entering an engine. Liquid fuel is sprayed and sucked into the intake of an engine, where it atomizes with the air around it and is then sucked into the combustion chamber. What about not metering the fuel at all? Strange idea.

It is strange to think about, but it is also a good theory. If one created a device that pulls pretty much all the engine intake air through a bath of fuel before entering the engine, in theory no excess fuel could ever be burned, because it draws exactly what it needs. After lots of brainstorming and several months of passive research seeing what others had come up with I decided to take a crack at a solution. The first go was literally finished in about 15 minutes, I took a Gatorade bottle and some clear tubing and drilled holes and put the tubing together. (video of Gatorade bottle coming) The engine ran extremely well, with no issues at all it revved very freely. Actually when the nut rattled off the throttle at full bore I thought for sure the engine would throw the rod!

So after such a successful test I came up with some parts around the house and put together a design on paper: 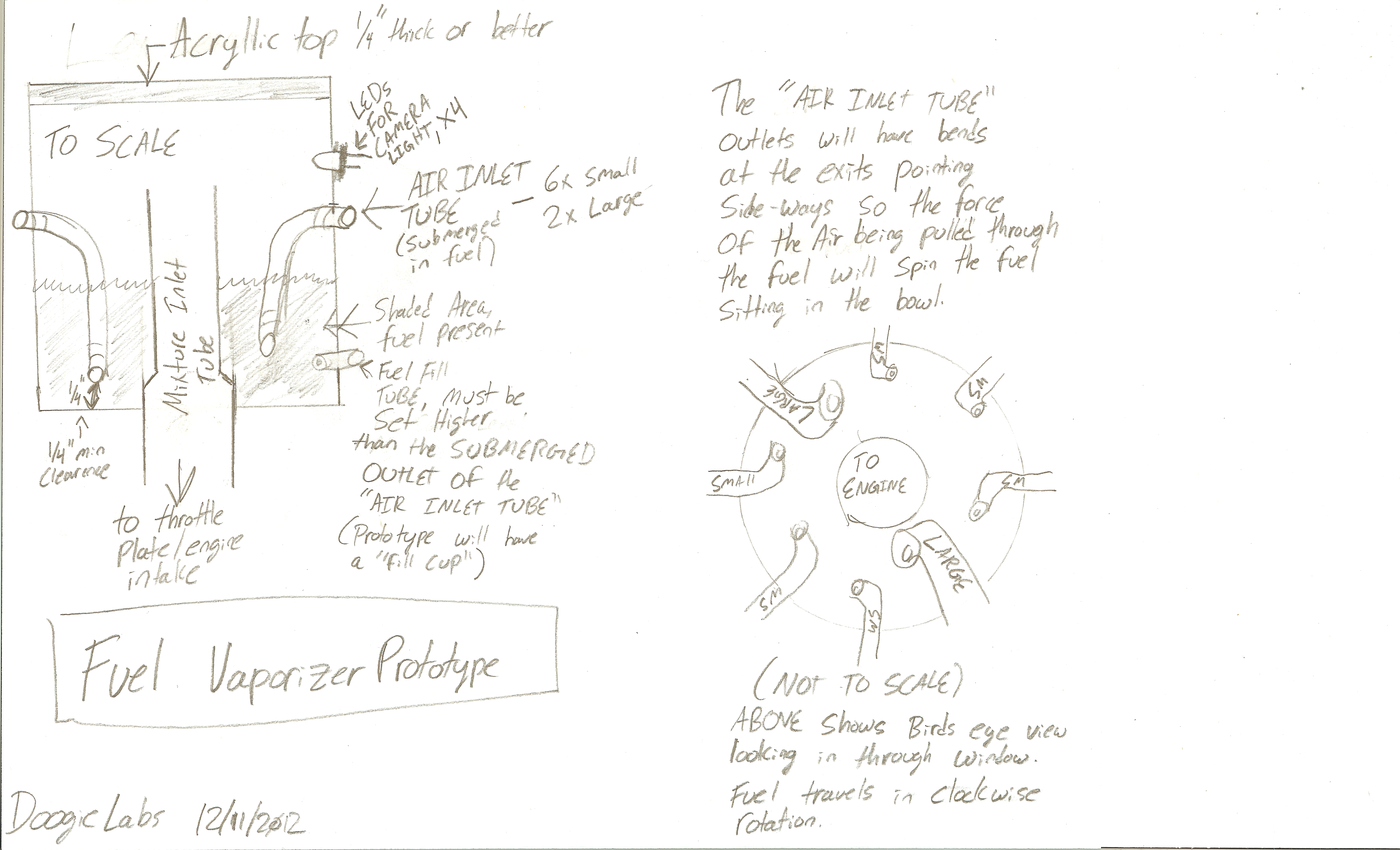 So I set off designing, building, and testing.. I decided to shoot a video documenting my findings:

– The foaming problem will be dealt with immediately in 2.0. The engine ran really good until the fuel was directly sucked into the engine as liquid from the top of the foam, causing it to choke out rich.

– At this point the fuel did not spin in the bowl, or there was not enough evidence to show that it would. This may change with the design, but for now I am not sure that it’s worth perusing. I’m thinking we’ll leave this off to later designs.

– The percolator tubes will need to either be longer, or have some kind of spill over bowl. At some points during starting the fuel still gets forced out the tubes. I’m sure that bypass air ratio has something to do with this as well but the bypass air will need to be very little during starting because air being drawn through the percolator tubes is essential for the fuel vaporization process to occur.

Electric approach: There are other videos on YouTube where people have actually used an ultrasonic transducer that is commonly used in air humidifiers to vaporize the fuel and send into the engine. This may not work very well for large engines, but I am going to experiment with this on a small engine as the transducer will have a better chance at allowing the engine to produce full output power.

doogie
I hope everyone had a fantastic holiday! The Van is pretty much finished, the bumpers are on their way and

doogie
9/28 Update: Got more done on the Corrado, decided I should share what I have. Installing the Frankenstein shift-box and