I have been made aware of an issue with the PayPal shopping cart where when you click on the checkout button you are left with a blank page. After combing the server logs on this issue and finding nothing, I finally caught a break last night when testing in the latest internet explorer, it gave me an error message regarding opening a secure page in a frame. I instantly knew what needed to happen, so I opened up wp_shopping_cart.php and added the target=’_blank’ directive in the appropriate line which is highlighted in the screen shot below:

I saved the changes after updating the file, and then realized I made the mistake of using double quotes ” ” when I needed single quotes ‘ ‘, then everything worked straight away. Paypal opens in a new blank target page and takes you exactly where you are supposed to go. If there are any additional issues with the shopping cart or services page, please let me know. I appreciate everyone’s patience on this issue and apologize for any inconvenience it may have caused up to this point. There should be no more issues with PayPal, and the issue at had is completely understandable. They are as secure as any other bank online. It really is most secure to start with a fresh browser window, leaving no attached sessions and as a result no chance for executing arbitrary code to execute, so very good call. I can say with confidence that this issue can be put to bed. I will follow up with the plugin writers in the next few weeks to consider this code change to the primary plugin code fork.

So over the last two weeks the computer arrangement in my office has changed, and I have reduced the number of computers used in my entire shop down to two, not including repairs of course. That is really crazy considering before I was using 2 laptops and a desktop just at my desk, then a computer in the showroom, and needed a computer for the second desk in my office. All of this has been eliminated with the help of the SunRay.

What is a SunRay? Well, you can think of it as a networked appliance, or similar to a “Thin Client”. Just like Thin Clients the SunRay is a disk less computer of sorts with some differences that set it apart from the rest of the herd. 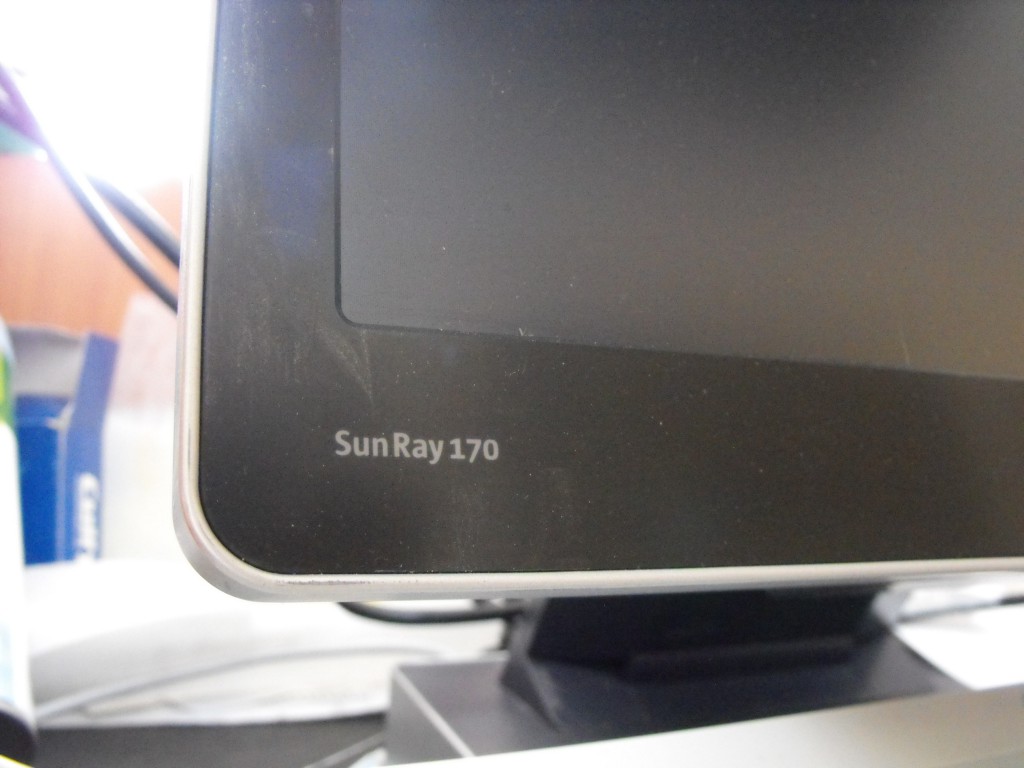 The SunRays that I was able to acquire were actually an all in one of sort, they didn’t require an externally attached display. This actually worked out perfect for my situation, as I didn’t have many displays to spare. The SunRay 170 also comes with an auxiliary input, perfect for hooking up external computers for a quick test. Since it doesn’t take up much space on the bench, there is plenty left to work. This worked out really well for me since I was able to develop an invoice and inventory tracking system that is used within Solaris. Whilst I could spend a bunch of money on windows licenses and off the shelf software solutions, so far the only cost I’m actually out on this is the hardware itself. Another interesting point is security by obscurity, basically meaning that since these computers are actually dated, and Solaris for the Sparc Architecture has been nearly abandoned that nobody really wants to bother with the time to write a viruses for the stuff anymore, yet Oracle still puts out updates for the Solaris 10 operating system. It’s like using Windows XP but never having to worry about viruses for the same reasons. Solaris and XP share a few commonalities like both being 10+ years old and are still supported actively by their vendors, they are both depended on day in and day present day, but one is incredibly secure.

I am not saying it’s unbreakable, as I’m sure just like anything in the world it’s fairly breakable lol. Thats neither here nor there are this point, because my data is secure and in one place that’s owned by me. My own cloud service. I will say I don’t like the idea of massive clouds, but digress.

So what’s inside a SunRay exactly? well, lets compare them to a thin client, so we can get a general idea of the differences. Remember that a thin client is a very close cousin to a regular computer:

So in the general overview, a key difference is apparent. In the world of X86 thin clients, some of the CPU intensive duties are handed off to the thin client. Such as local graphics acceleration (GL Rendering), maybe even audio and some other features. It is mostly this reason I feel that the thin client has remained very close to a full fledged X86 PC over the years. When compared to the SunRay, it leaves all those CPU intensive tasks up to the server, which in multimedia experience is a bit of a drawback since network and server CPU resources are sacrificed for smooth video playback. If most of the stuff around the office is well… Office work, this works perfect.

Here is a video preview of some work I did before I finished the above setup.

I have so much more on this but I need to crash out, so I’m posting what I have done. I hope you enjoy, look for more on this and so many other things a little later on this week.

doogie
Motorola MW800, Tour and Information Resources: Once in a while I am able to obtain a batch of these magnificent