Working away getting more done.

I have some new stuff to share, I have picked up some vintage computer goodies. I am now the proud owner of a pair of functional Silicon Graphics machines (Octane 2 and O2) which

I also haven’t really shared my new alarm panel but I have finished my RFID alarm setup, I will discuss more later but here’s the goods for now:

I’ve actually had this designed out and setup for a while, I just haven’t gotten around to sharing it online yet. The keypad looks good in my opinion and functions great. I have not came up with a front cover for the keypad yet as that’s kind of a final step, the finishing touch. The control cabinet is definitely going to be more involved in setting up, both hardware and software wise. I have been procrastinating a bit, it’s hard to sit still long enough to develop a decent bit of software. I know I can do it but when you are in this line of work things have a tendency to pull you several different directions. The components visible on this board besides the RFID reader daughterboard itself are the PIC 16f648 Microcontroller, 20MHz Crystal for the clock with supporting caps, a speaker / buzzer, RGB LED, and a RS422 Line transceiver.

I’m still working on getting the main control box together. I still have a couple of projects ahead of getting some serious time in on that, but I’ll have more on it as I go on. It’s good to see an increase in customers come through the door. I just need a hundred more a month or so and we’ll be off to a really good start 🙂 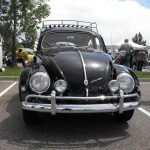 Volkswagen on the Green was this last Sunday, there were lots of creative setups this year, I’m impressed. I don’t think by any means the VW community in shrinking, at least at this first show it seems quite opposite of that. What a great way to kick off the year. It was cool to see some familiar faces, and familiar cars.

What else has been going on? Well, my regular non shop job has changed schedules on me, which is really lame as this means that I cannot be at the shop until the afternoon. I can be there by 4pm which is still “not bad” but since I have to be up extremely early for work this definitely means I’m not going to be able to stay at the shop so late. If I can get that customer base I’m looking for, this wouldn’t be any sort of issue at all, but all in time. Being a business that doesn’t have a business loan, and is essentially month to month I could disappear at any moment. However, since this Job is here and is keeping the doors open I don’t mind taking it slow. Some people start 5 and even 10 businesses before they create one that succeeds, with that being said and this being my first one, if I fail, I want to fail knowing as much as possible but failure is not an option 😉

doogie
I picked up a large lot of SGI stuff that was about to be trashed, and have been working to

I’m back in Colorado for a short time! August Update!

doogie
Good day everyone and welcome back to an August edition of a DoogieLabs site update. So I'm back in Colorado