So with the Server issues that I have had it got me thinking about more expensive hardware, the good stuff. Computers that are meant to be servers, designed with fault tolerance and built with decently branded components to avoid the cap explosion that killed the Powerhouse server, and the generation of server before that. I do get that to some degree I will never be able to avoid these issues, because there will always be dirty power. UPSs and surge protectors will help, but so does ultimate design.

Over Christmas I was busy looking at alternatives, doing some research and trying to come up with something that would best fit the needs I was looking for.. Which was a bit strange. I was looking at purchasing all new hardware, but I have always been a fan of other architectures like the PA-RISC or SPARC processors. They have a cool historical factor and when carefully selected the older stuff is still matched performance wise to today’s machines for the most part. After doing some research and figuring out that I would have to spend over $1000 for a decent x86 system in 8 cores or more. Yes I said 8 cores, but why? I want to chew up some CPU time. I have some DVDs that need to be compressed into Movies so I don’t need to bother with discs, I want to experiment with writing multi threaded applications, possibly in encryption, and even just for fun. There is no particular project I am trying for with c++ programming, other than gaining a skillset.

I looked on eBay for a bit, started comparing and looking at processors in different systems. Initially, I really wanted an IBM RS/6000 of some sort. I have not had the privilege of being able to mess with AIX first hand and figured it would be a neat way to get acquainted with a new operating system, but no dice. They are all still incredibly expensive, and most are serial console only. While this doesn’t bother me from a techinical standpoint it didn’t fit with what I was wanting to do, which was have a server that doubled as a workstation. I wanted to harness all the CPU and Disk power and have a local graphics console, with decent enough hardware accelerated graphics that I could develop graphical oriented programs, and watch movies, maybe even edit movies and the like.

Anyways, after having a bit of a fail at the IBM stuff I turned to a machine that I always liked, the HP9000. The PA-RISC architecture behind the HP-9000 is very interesting. For a while there were versions of Windows NT and even Windows 2000 for these CPUs, but windows support was short lived when there were really no developers interested in porting applications to these CPUs so it was dropped a short time later (which is fine), leaving only a few Linux flavors to run on the machines, besides the original OS of course. The HP9000 is a great machine, some of the later models, like the C8000 workstation for example, use dual core processors, which usually have 32 or 64MB (and MB was NOT a typo) of cache. These machines too, are still expensive, the C8000 definitely was not, it was right in my price range, but it didn’t offer the disk storage that I was looking for. I need something with lots of disk slots, so I can run many drives in a RAID5 array to provide some Fault tolerance for my Data. These days my data is in fewer places, and I cannot put all my eggs in one basket on this one, I need something that will allow me to lose a hard drive yet still continue working. A comparable HP9000 with a decent amount of CPUs and disks only takes 240v power input. This is not an issue at my shop, but it is at my house. For starters the server will be at the shop, but if for some reason I need to move out of the shop, it would still need to work at my house.

So with that one off the list I looked at a couple of SGI systems, and really they’re just too slow, they are good, vintage computers and can still do a lot of things, but they are not very high in clock speed, they wouldn’t be very feasible as a usable desktop computer today. Sure it would serve up web pages and files with ease, but that would be just about all. What about playing videos, music, and all those other wonderful things “less powerful” desktop computers can so easily do? I didn’t feel an SGI would cut it here, so that landed me back to an old friend of mine, Sun.

I have owned Sun boxes and servers before. My very first Sun box was a Sparcstation 5, it was the 170MHz model so was the fastest of those offered back then. It was interesting to learn solaris on, and got my feet wet in what a real Unix environment was like. I had that box for a while and it was good fun, it wasn’t exactly a server, pizzaboxes dont make good servers having only two drives and all. The second Sun box I had was a Sparcserver 1000, this was an 8cpu Sparc server, if I remember right it was 8x 80MHz Supersparc processors in it and ran Solaris 9. This system actually performed good for running at only 80MHz. It was really neat to have, and I regret ever giving it away, I would actually really like it back. In between then and now I’ve had an Ultra-2 and an Ultra6, none of them really impressed me, stuff just wasn’t as snappy as it could be. I think out of all of these Boxes the Ultra2 with dual 300’s was the best of the bunch.

Fast forward back to this last December, it was suggested to me “How about a sun box” when I was looking at potential choices. I started looking and immediately found a few that wetted my apetitie. it was all a matter of research, what was going to be the best choice?

Because this is my main server, the storage needed to be somewhat current. Huge lots of 18gb drives are horribly power inefficent, at one point the rack drew near 30amps continuous power, so half that would be acceptable.

I found a deal I couldn’t pass up, a Sun Fire V880 server on eBay, I made an offer of $100 and won it. The server configuration originally was 8x 750Mhz Ultrasparc IIIs, the extended drive backplane so all 12 drive slots are usable, which are Fiber channel SCSI (wikipedia FC scsi link here ), Gigabit Fiber network, ethernet, 3x 1100watt power supplies and 32GB of RAM. It is a deskside configuration, and even has a more powerful cousin that i had looked at, the V890, which can take dual core Ultrasparc CPUs, but is only available in 220v power supplies 🙁 ..

So I was fine with my choice, I decided it was the right price / power, because I could fully load the server, for well under $1000, maybe even under $600..

I’m betting you’re wondering what does this machine look like? It’s a beast: 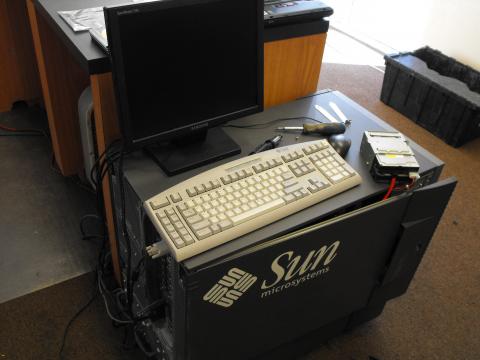 Incredibly inexpensive, still incredibly useful, and has some cool historical factor to it, since this was what I’m considering the first edition of a collection of computers I had some more thoughts on this “small project”. . From a computer collectable standpoint, the ones that retain or appreciate in value the fastest are ones that have all the available options that you could get at the time it was sold. Even though the computer I bought was 8x cores, it was only 750MHz, which was the base speed offered for the v880 model. Don’t get me wrong, 750MHz for these older Sparc CPUs is actually pretty good. (Excluding the multi-core ones that Oracle developed after acquiring Sun of course) 1.2GHz was the fastest single core CPU board that was offered for the V880, with the V890, an otherwise identical server hardware wise, offered the dual core CPU cards. I found these 1.2GHz cards on eBay, for an incredible deal, $15.00 per board + shipping. I promptly bought four boards for my machine, they arrived a week and a half later in a single 60lb box, a fresh start towards fully loading this thing up.

The research immediately began on what options to purchase for the most optimal performance for my application and landed on this configuration:

When I received the original configuration it had two bad ram sticks, I love Sun hardware because it can keep functioning despite this, with all associated banks disabled I was down to 24Gigs of ram. I did find some memory and was back to the full 32Gb in the first week: 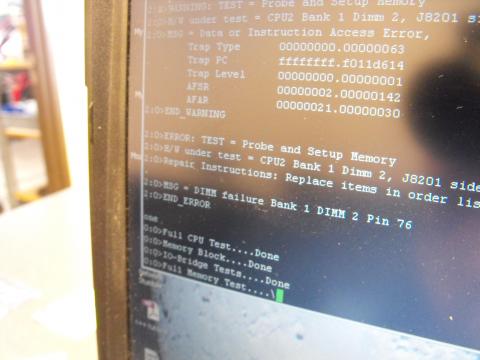 Here is a shot of the card cage in its original state, this was when I was trying the SATA card that I had on hand, which wasn’t Solaris Sparc compatible: 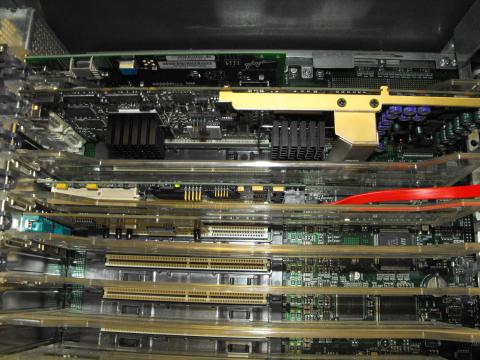 I purchased 12x 146Gb Fiber channel SCSI hard drives. The first two drives are in a RAID 1 which contain the OS. The next 10 are in a RAID 5 for a total of approximately 1.5TB of fail safe storage space. 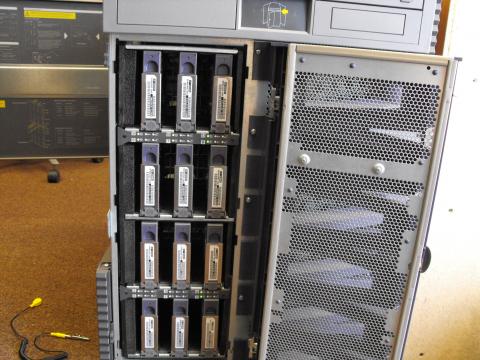 Here is the front all closed up, I always have liked the way that Sun used to style their systems, not as futuristic as the SGI but still very easy on the eyes. 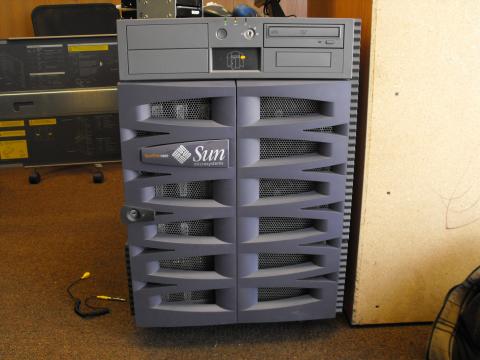 I have done more upgrades on the server, so I will post pictures this coming week of what was done. It’s been almost a month since I originally received the server and started to get things setup. I am putting finishing touches on the web server end of things, then all the sites are getting moved over.

doogie
Howdy!   Alright, I must admit that it has been quite a while since I really have posted anything. There

doogie
Whats happening? Lots! First off, I finally finished the tour and full video of the Motorola Mobile Work Stations /

doogie
PAYPAL SHOPPING CART UPDATE: I have been made aware of an issue with the PayPal shopping cart where when you