Finally got around to getting the new site together. Totally new look, totally new foundation. Freaking awesome. Its taken some adjusting to the new format but I’m finding it more useful than the old layout.

So, whats new at the shop?

Lots, I have started shaving the engine bay of my Corrado (project page coming soon) and getting ready for a long winter of purchasing goodies for the car. I have been waiting the better part of 10 years to see this car finally through to the way that I want it done. I have a few things to wrap up over the coming week before I can really get cranking on it. Mostly thinning the parts laying around and the projects on my plate currently.
Whaaaa
New toys:

Got some new cool stuff in, I got an amplifier for my totally awesome stereo system. It does 400watts per channel and is a Class A+B amplifier. I got it for a really good price, actually I traded a catalytic converter off of one of my parts cars for it. nice!

I also built an all in one computer out of an old flat panel monitor. I used one of the old “Thin Clients” I had laying around that was deemed for recycling use. I disassembled the case and made holes for where the monitor stand bolts to the backing plate. (you know, those four mounting holes they use on most wall mount type setups.) The thin client itself is a 1Ghz Fanless model, an old WYSE winterminal that I had sitting around. (more detail with images below) I decided to load it up with Damn Small Linux ()

So.. What gets cut then?

One thing that I am considering ditching is the A/C project. Its great to have in the summer, but its taking up a good portion of my space that I’m going to be needing for this Winter. The A/C cart project is basically a 3.5ton central air unit built into a cart allowing the garage door to close between the inside and outside parts. It would be really sweet to see how something meant to cool a house cool a 2,000 sq foot shop space. I’m betting it would do it quite nicely too. 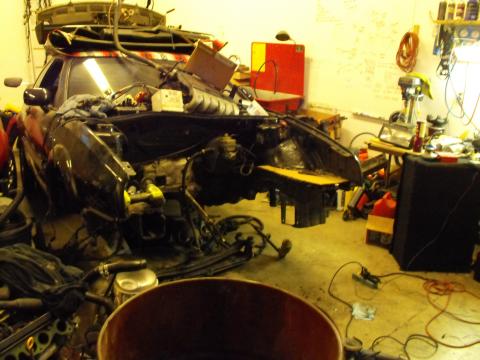 The start of the shaved engine bay, mock-up using CAD or “Cardboard Aided Design” for cutting out the sheet metal filer panels to cover the not so smooth frame rail. I did make an attempt at paneling it in, but now that I’ve done it I think I’m going to go back over it again, life is an everlasting learning process. 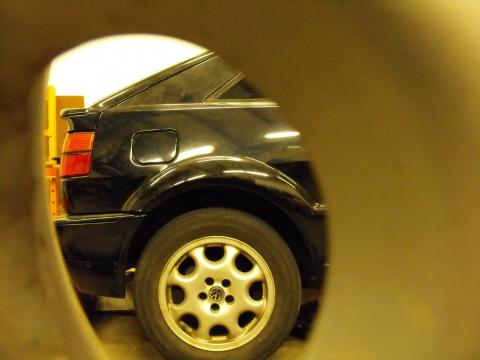 Some new Corrado parts also include Wheels from the Passat that I had parted out. These wheels I feel can make for a very updated, sleeper looked when finished right. So I’m game, lets see what happens. Refinish is sometime into the winter however, the main focus needs to remain on the car itself for now. I have put in many new parts, but its hardly a start on the slope of accumulation that needs to take place. It is hard to find time with all the other obligations at hand, this winter it’s time to do work. I will work on getting a page setup specifically for the Corrado, for those who know they know the plan, otherwise exposure on this project has been rather secret. This is purely coincidence because the time spent with the car is more working than documenting changes. 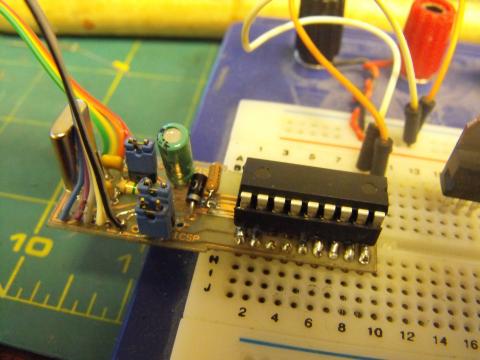 It really stinks that its cooling down outside, I dislike the fact that summer is gone so soon. Usually I disliked this time of year the most because it was the hardest time of year to get anything done, but since this is my first winter with the shop I won’t have to worry about that too much. I guess that can complicate things in a way, since I usually use the winters to tackle the electronics portion of things. One example of this would be my display board that I have been working on for more than a year, the final designed board is just needing to be finished in the drill press, and assembled for the first ever test. I hope to see that done soon, I have been volunteering my time to another cause temporarily so I have even less time for projects. 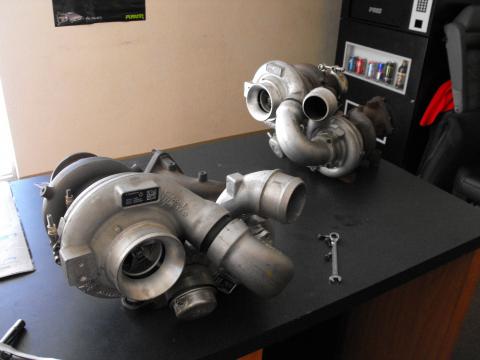 One interesting thing that floated in the door lately, is a set of Compound turbos. These are quite an engineering marvel, what a mantle piece it would be. However, I am trying to sell these to someone who could put them to good use since they only have approximately 1,000 miles on them. If you are interested in picking up a set of these at a very good price, shoot me an email (doogielabs@gmail.com) and we’ll talk. The pair of compounds in the picture were for a single engine, so they are actually reasonably sized for use on 6cyl or larger gasoline engines.

I was planning a huge intro post, but the thing about that is I have to put off launching the site more until I can allocate time to do that. I have other material that will make smaller posts, and would fill up the page anyways. Anyways, welcome to the new site and enjoy. There will always be a link up at the top to the old site so all the archives will still be there.

doogie
It's been warm out so I have been busy! I have gotten more of the much needed body work /

doogie
Project Introduction: So we were given a Troll Systems camera housing with everything except the S750 master controller. Instead of