I met someone at The Geek Group who happened to have some old HP 9000 hardware laying around that he didn’t want anymore. I offered to take it off his hands and so we met up and I offloaded the good and carted them home. It was a pair of HP 9000 R Class servers. This is their information page, a little bit of history, hardware, and what they are doing today.

HP9000 computers were direct competition against Sun Microsystems and Digital Equipment Corp in the 90’s and early 2000s. They are considered to be on par with other RISC Architecture machines. Like competition of the era, HP PA-RISC machines exhibit some unique qualities that set them apart from others. It was an interesting era, where companies competed in processor design to come up with a computer that would beat out everything else when it came to scientific computing. Some companies developed a niche, such as SGI and video production. HP’s machines fell more into the server and scientific side over multimedia, maybe with Sun Microsystems being somewhere closer in the middle between server and desktop / multimedia. PA-RISC is a Big Endian byte order processor, and starting with the PA-8000 series in 1996 was 64 bit.

The R class and the D class are basically the same machines, with the only real difference being that the R class was fitted to a rack mountable chassis, where the D class was more of a desk side. Both configurations accepted up to a 240MHz PA-8200 CPU with 2MB + 2MB of Cache, per CPU. These particular systems were released in 1998, and whilst I don’t have the exact original retail price it seems these particular systems cost between $15,000 and $25,000. Definitely a chunk of change. In the case of the R series, you basically got a maximum of 2 Processors, 72Pin 50ns SIMMS (128Mb minimum not sure on the maximum.)

If you want to read a great resource page on the D and R class machines click here.

What configuration I ended up receiving:

Actually, Server #1 still had an operating system on it. A few minutes was all it took for me to make my way into the trusted system: 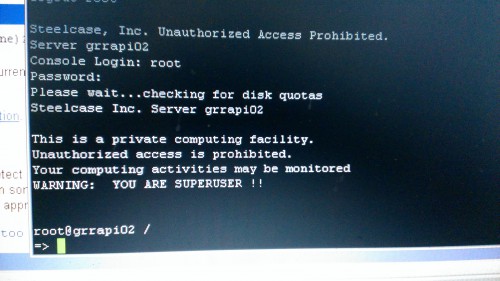 All the data from the home disks had been pulled. I wasn’t really up to anything mischievous, I just wanted to see what HP-UX Looked like and gather some basic information about my new found system. I will be receiving HP-UX Disks soon and will re-load it once I do have them. For now I wiped one of the disks and decided to try out some different operating systems to see how they performed on PA-RISC. The HP-UX that was installed on the machine had been originally installed in October of 2003. That’s 10 years! Not bad. The machines were in pretty good shape. Plastics where taken care of, they were clean enough inside I didn’t even need to dust them. When I first tried to power on the single processor server I didn’t get anything at all on the display, then I re-seated a couple cards and still didn’t get anything at all. After removing the remote management card, everything seemed to come up display wise. I immediately tried to sort out getting a framebuffer of some kind working on the machine, as there are PS/2 Keyboard and Mouse ports. Unfortunately, the machine doesn’t actually support any old video card being plugged in. . It must be one specifically designed to work in an HP 9000 machine. (par for the course) I have been relying on a null modem cable connected into the 1st serial port to perform all of my system setup tasks. This hasn’t really been that bad, I guess after working with lots of other machines over the serial port I have kind of gotten used to the speed. (9600 Baud in this case. I can adjust it, but will speed it up after I am done initially playing.)

The slot loading DVD drives are a really nice touch. It’s nice to have some good SCSI DVD drives, but seeing the slot loaders in the HP9000 certainly doesn’t remind me of 1998. Okay, maybe it does only a little bit. Who uses CDs anymore? 😉

What am I going to use this machine for? I don’t really know, it’s more of a fun time, a museum piece. I’m sure I’ll find some mundane task for it that will give me an excuse to pull it out once in a while and let people check it out. Hosting a page of some sort? Maybe Emergency backup web server? Already got one. Too bad she eats up too much power of continuous duty use, because DNS and Gateway server would be a perfect use for this thing. Maybe putting it up for a couple of weeks every few months and letting people login and play with it would be the best solution. If that is something you’d be interested in, please let me know.

Attempting the latest Gentoo Linux install on the HP 9000 R390:

While waiting for things to move along, I couldn’t help but wonder why it was so slow, poky. I’ve used 200Mhz machines before but this is life in slow motion. 😛

Installing Gentoo following the guide is really straightforward. I had no issues up until I went to compile the kernel. It would error out and it seemed no matter what I did to adjust the configuration I couldn’t get around it. I kept receiving the error message: “spinlock.h:26:9: error: ‘asm’ operand has impossible constraints” .. as well as “can’t find a register in class ‘R1_REGS’ while reloading ‘asm'” .. What a pain 🙁 Luckily, I poked around for a while and I got something worth looking into, and I was able to find a method that someone else used to patch an older kernel:

That was a nice break to catch. I ran time against the kernel compile, and it didn’t take advantage of SMP running only 1 thread for the compile. The total compile time was:

I will post more compile times later on when I rebuild the kernel, and attempt a 64 bit kernel build and report back the results. (I never got a new kernel to boot correctly and will be revisiting this issue sometime)