After initially shoving everything under with just a tire I was quickly annoyed and tired with the whole process, and since I couldn’t just wheel it under with an engine hoist a more viable option had to be found. After looking at an old shopping cart I had it hit me, make an engine cart!

Actually if you have a shopping cart this is the easiest thing in the world to make, all you need is a cutoff wheel or a sawzall. Basically you cut the cart part off the top of the wheel platform, cutting as close as you can to the frame to provide as smooth of a surface as possible. Then you’ll want to remove the lower shelf and by the end you should be left with 4 wheels and the frame they bolt into. There should be no type of cross bracing other than at the front where the front wheels mount. This becomes your engine cart, the only thing you will need to do from this point is take some rags and a roll of duct tape and pad where you had cut the cart top off (at the back wheels of the shopping cart). Wrap each “leg” so that the rag or tape doesn’t interfere with wheel operation but padded enough to acceptably contact a gasket surface.

When you goto put the engine / trans on the cart the two will need to be bolted together already, and the whole lot suspended from an engine hoist. Next you wheel the cart underneath so that the front of the shopping cart sits underneath the transmission about where the shifter mechanism is located. This is where the “front cross-brace and wheels” of the cart will sit underneath. Next looking at the “legs” (each leg should have a wheel so 2 legs) that you padded earlier you will notice that they almost line up with the exhaust manifold gasket surfaces. In fact, the cart legs should be a little wider than the two surfaces but that is okay because it’s flexible! You will want to position one leg in between the studs for the exhaust manifold and then while holding that up with one hand take your other hand and pull the other leg inwards and into the studs on the opposing exhaust manifold gasket surface. Each leg should be in-between the rows of studs and covering the exhaust ports of the engine, at this point you can lower your engine and trans assy onto the cart and let the cart take the full weight of both. You will find the “tension” of pulling that leg in very handy as it will stabilize the engine and allow the front of the engine to rest on only the two wheels while the other end is jacked up to connect the transmission mount: 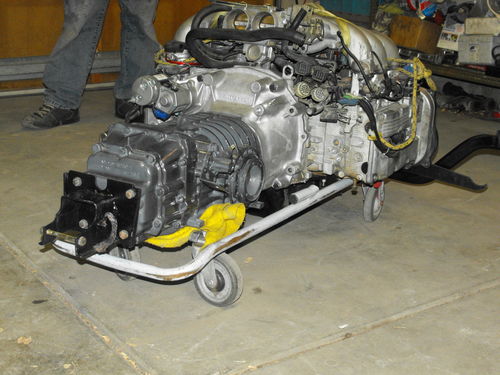 This cart allows many huge conveniences, the first being that you can fully assemble your engine swap, cross member and mounts(minus exhaust)and freely wheel it around the floor and under your van for installation: 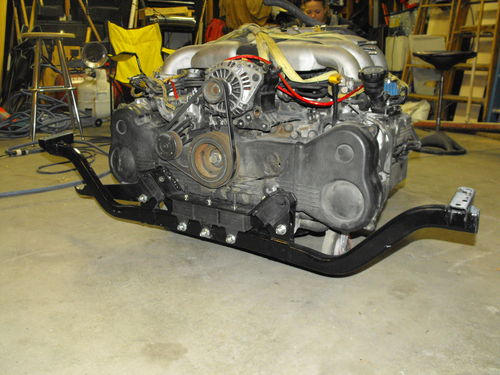 The second being that with the stock oil pan it really does give me the exact ground clearance I need to wheel it under the Vanagon, all without modification, NICE! 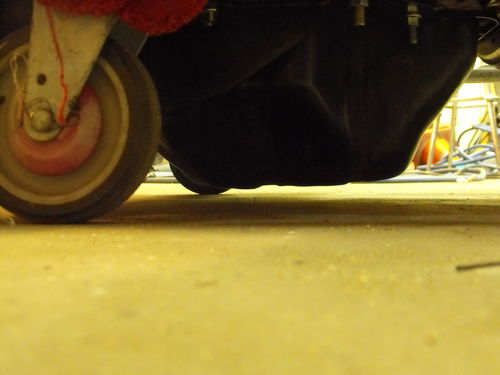 Here it is ready to be stuffed, since I have started using this cart it has cut engine removal time down to 40 minutes, and installation time to a little over a hour. 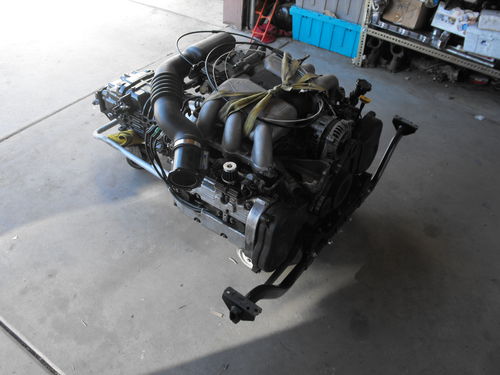 Rolls right under, then all you do is bolt up the trans mount and lift the engine in using a hoist or jacks from underneath to attack the cross-member bolts, I actually plan on adding more information about this cart and a step by step engine installation process when the JDM engine installation takes place:: 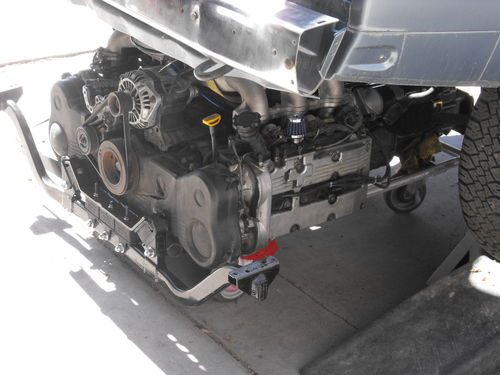 A moment in reflection of a job well done: 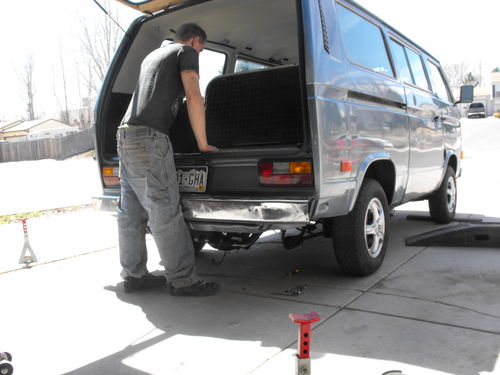 One of the initial things you’ll notice in a Vanagon is how the engine compartment is divided by some sheet metal, You are going to need to cut this out to allow clearance of the air intake box, I ended up starting by leaving about 1.5″ of metal from the outside edge of the drivers Side electrical box. Cut upwards until you get to the cross Support for the Floor which is only about an in or So thick. Next you start your cross cut and really you only need to go a couple of inches past the airbox, but I continued past even the coolant lines because on a 2WD Vanagon using the smallcar Stainless lines they need you to shorten the pipes about 6″. I didn’t seem to take any pictures of this and I am un-sure why, however when the engine is out the next time for the JDM Engine Installation I will take some pictures of the engine compartment cutout so everyone has a better understanding.

One thing you’ll most definitely notice is when using the smallcar mount kit it makes the engine sit really high in the engine bay, it really does fit perfect with the exception of the snazzy name plate that sits on top of the throttle body as you can see you can’t shut the engine compartment cover anyways: 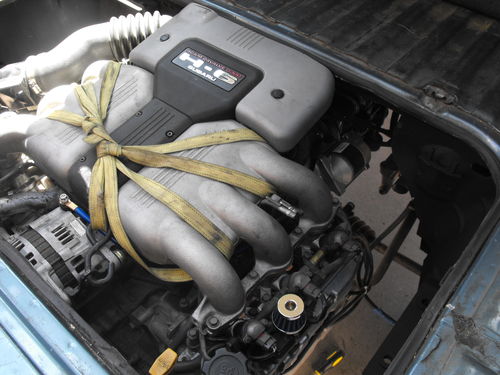 It took about 10 minutes of brainstorming before I came up with a good idea, I never liked the huge plastic part that went around everything anyways so I just decided to cut it out: 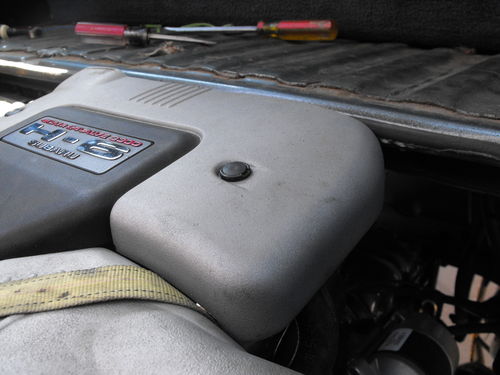 In these next two pictures you can get a general idea on how I cut the divider out in the engine bay, you can see how I went a little wider to include the coolant lines: 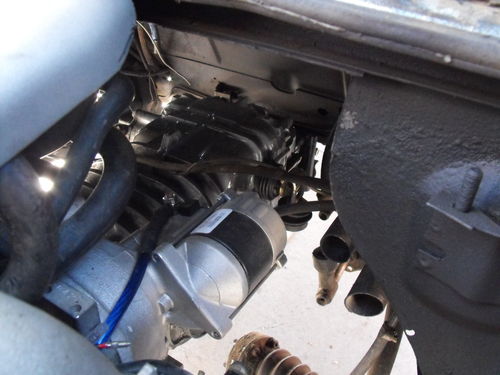 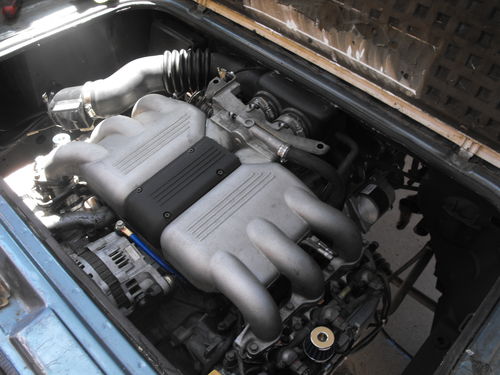 New cutout name badge installed, this actually still rubs on the bottom of the engine cover but luckily that is all foam so it doesn’t scratch the letters on top: 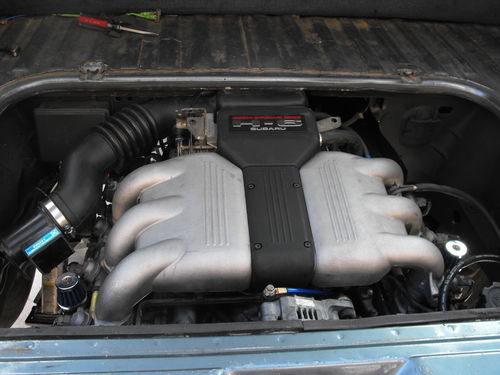 After doing some of the trans stuff (axles, shifter, etc) it was time for the initial air filter installation. I actually create a cold air intake setup for this bad boy on the performance section of the vanagon page. (here) 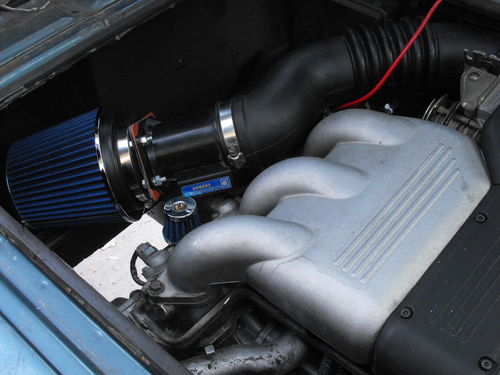 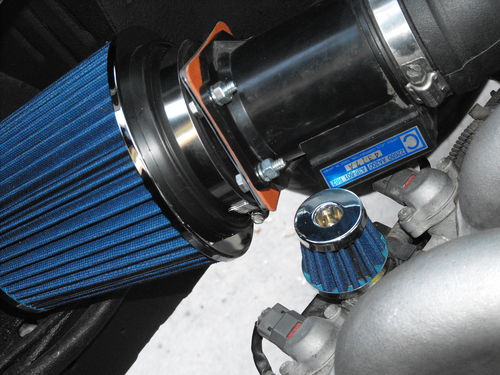 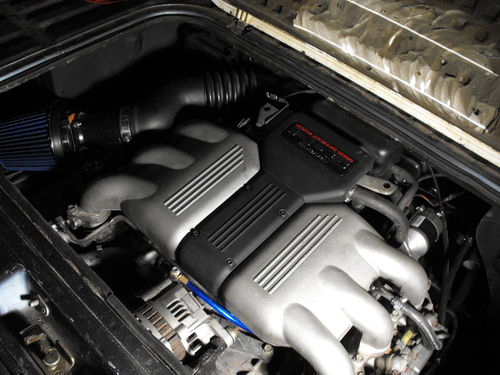 This project didn’t go without it’s share of problems and this was one of the most irritating ones to date, there apparently was a batch of bell-housings that were machined slightly out of spec causing the clutch slave cylinder to leak. The initial fix for this was to install a second O-ring which seemed to do the trick for me, but it wasn’t much fun taking things back apart. Since I have put 9,000 miles on the swap I haven’t seen anymore issues and will post some inspection pictures once it all comes back apart: 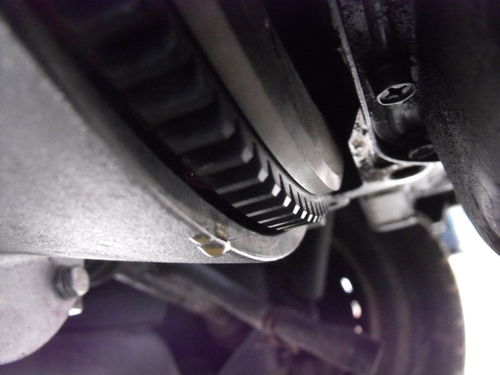 New one piece speedo cable to get rid of that O2 sensor box: 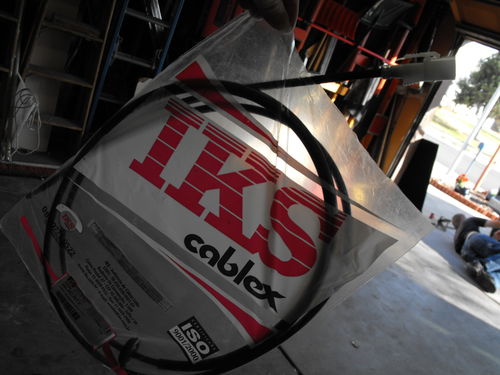 The second major issue with this project; After getting the engine installed and wired and actually driving Albert for the first time a problem soon arose. Once the engine was warm it would start to misfire on one hole and start spitting out white smoke which was a tell-tale sign that the head-gasket was gone. The head-gaskets are known to be weaksauce on Subaru engines and with the EG33 being a close cousin of the EJ22 this meant there was no exception. The thing that really irritated me with this engine was the evidence that it had been driven for quite sometime that state of disrepair. For example, the thermostat had been gutted. The most likely reason for this is to prevent the car from overheating which would most certainly happen with a head-gasket blow-out of this type. It was because of this fact I ultimately decided to purchase a second, JDM engine, but in the meantime this needed to be addressed so lets start tearing into it: 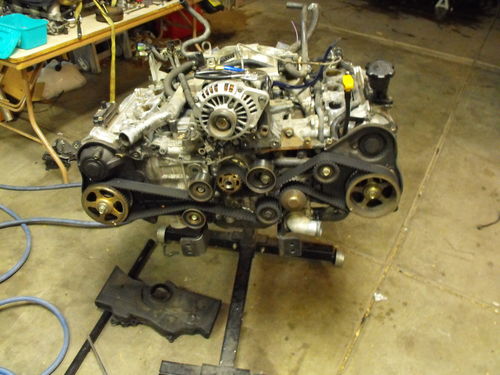 It was quite nice to be able to get acquainted with the EG33 in this manner, I feel much more comfortable with Subaru engines now as a result. Here is the side that had the blown gasket: 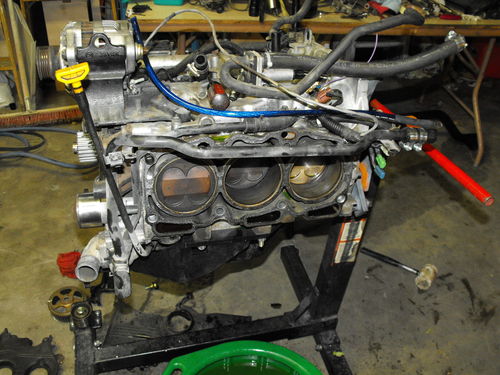 Good organization means everything will go back exactly the way it was: I love how small the actual block is in itself: 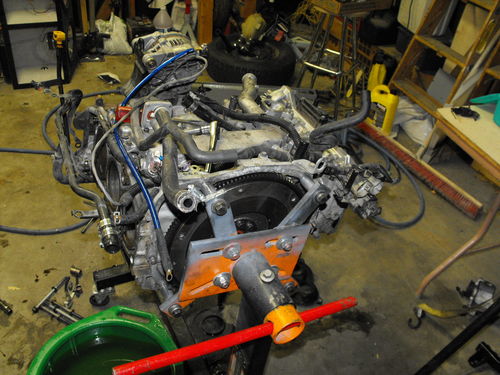 Even though this is the opposing side this picture is a great time to explain how the gasket actually failed. There are bolts at the very bottom of the water jackets that hold the two halves of the engine block together, these bolts are close to the sleeves and as a result the sleeve requires a notch cut it in it to allow clearance of the socket and extension. These notches pictured on the rearmost cylinder below are the weak points that cause most head-gasket failures in these engines. Subaru actually re-designed them with a metal gasket but superseded the part number several years ago with the felpro style material which is the very same gasket that failed in the motor from the factory, which meant for me that this was the only gasket I could get from the dealer so it’s what I installed into this engine. HOWEVER! Cometic gaskets will make them to order for you and they are the metal ones! I will most certainly be purchasing a set for the JDM engine because multi-layer steel gaskets is the only thing I am comfortable with running in my engines. It’s really worth the peace of mind! 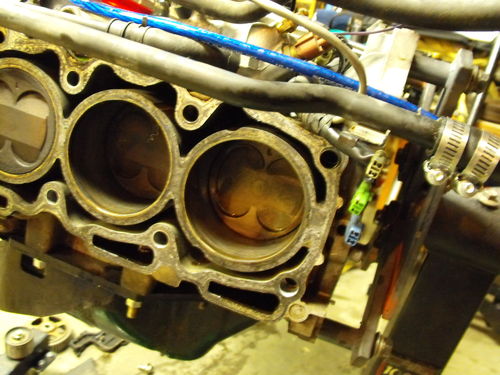 Here is a link to cometic’s site: http://www.cometic.com/sportcompact.aspx and here is a little snippet of about what to expect to pay for them (per side): 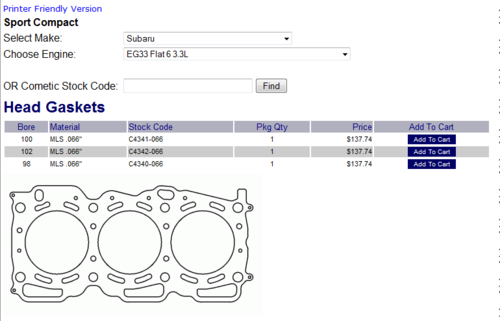 Both sides ready to be cleaned: 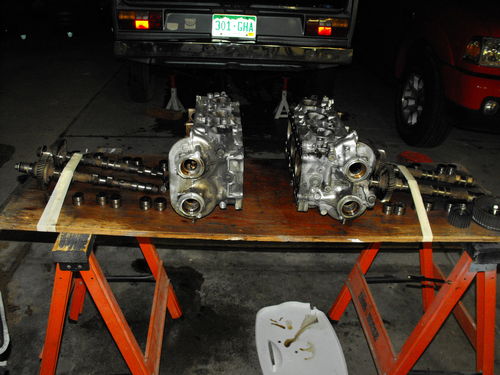 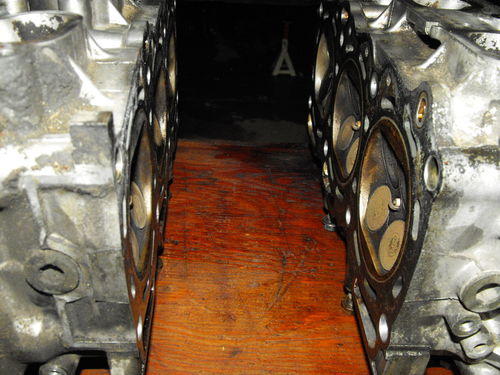 The parts look interesting when they have been washed and dried: 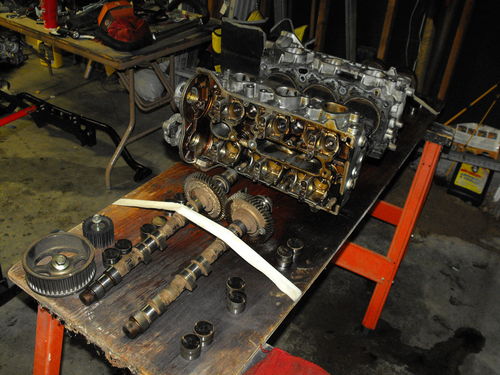 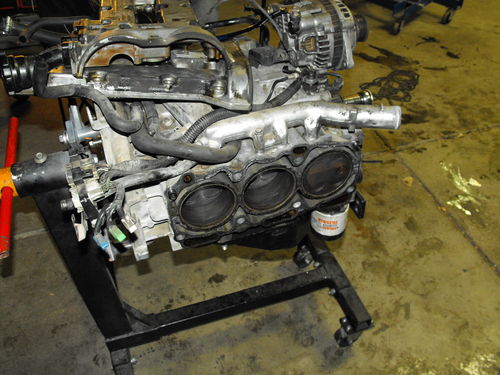 After cleaning the head-gasket surface and checking for straightness, I also cleaned the forged aluminum piston tops, they just beg for boost! You can also see those notches better that are on the outside of the sleeves, the notch at 7 o’ clock on the right most cylinder pictured below is where the head-gasket failure occurred on this particular engine: 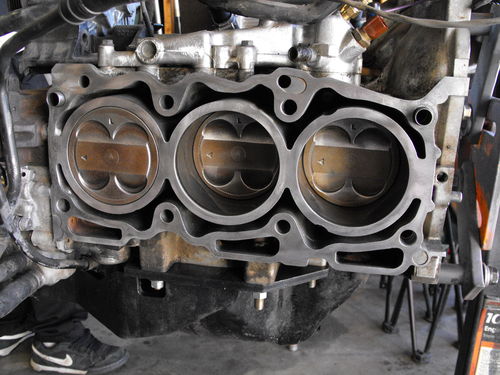 Wheeled the block outside for it’s cleaning. It’s kind of fascinating when you receive an engine with 20 years of crap wedged in between the intake manifold and the top of the block. I found leaves, pieces of newspaper, an extremely old paper towel, pine needles, and a whole heap of grease. It’s a great example of what happens when you never wash off your engine, which is something I include in my routine maintenance:

The new (non metal grrrr) head-gasket copper sprayed and ready to make that ever important seal: 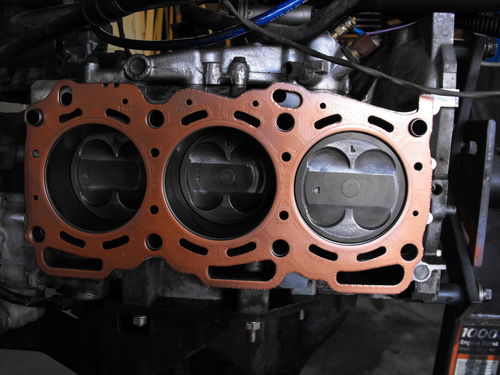 After the heads are torqued the rest of the assembly goes fairly quickly: 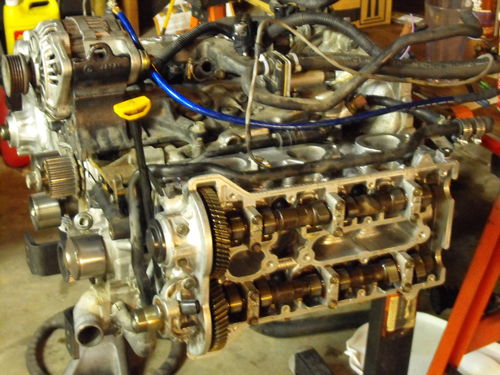 However, because of the attention to detail I was paying toward assembly I didn’t stop for pictures until it was ready to go back in: 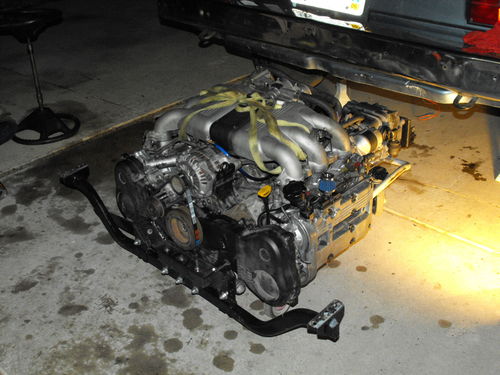